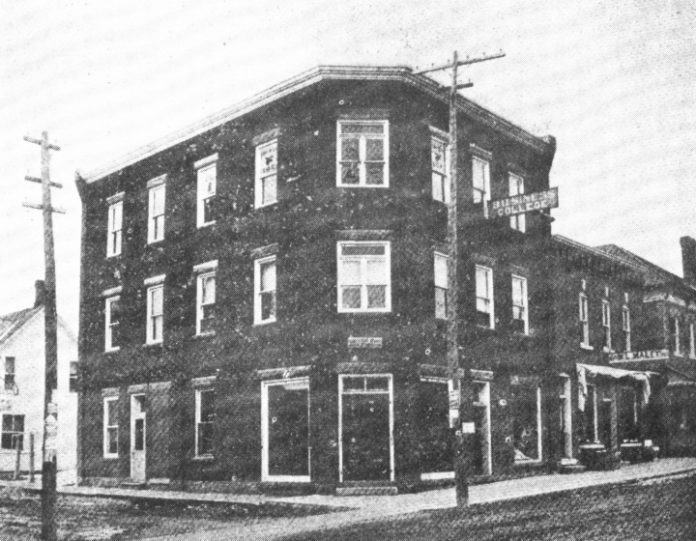 This is now the location of Mr. Mozarella Pizza, but it has a long and colourful history.

Kernahan & Wood opened a store along this block of Water Street in 1833. They had a wharf at the end of Thomas Street. Theirs was a general store, also selling their timber products. The building was destroyed in the 1872 fire. John R. Wallace, a merchant tailor who came from North Gower c. 1888, built the Wallace Block in 1901. It was the office of the Union Bank of Canada and housed the Willis Business College upstairs. The Dominion Department of Agriculture, Dairy Produce Grading Branch was located in these premises in 1935. The work consisted of testing and grading all cheese and butter in the district extending from Brockville to Ottawa to VanKleek Hill. Sam Lecker took over the building in 1948 and ran a store there for 35 years. Later, the Jonquil Tea Rooms were located here, operated by the McGuigan sisters but owned by Lemis Sykes. Patrons entered by the corner door beside which was a large teapot made of flat boards cut to shape, by way of advertisement.

The really interesting story connected with the building in 1924. Mrs. Gauthier arrived for work at around 7.30 that Saturday morning in October, 1924. She worked as a cleaner at the Union Bank, and expected to have a normal shift of sweeping and dusting before the bank opened for business that morning. She was surprised, looking through the manager’s window into the main room of the bank, to see a young man lying on the floor inside the teller’s cage. Being the cautious type, Mrs. Gauthier went outside and called in Howard Jannack, who was just across the street. Howard, too, peered behind the counter, but wouldn’t approach the man on the floor. Instead, the two crossed Water Street to Parkinson’s store and told the manager there, Mr. Swain, what they had seen. Swain was the first to approach the man lying behind the counter. He immediately recognized him as Claude Root, a teller at the bank for the past two years, and someone Swain had chatted to during his dealings with the bank. Swain tried to rouse Root, calling out his name, and then taking hold of his trouser leg and shaking him. He probably thought Root was just fast asleep, but he quickly realized that Claude was not going to wake up again – ever. Looking around, he saw a pistol laying on a chair beside the body.

For the full story, see “The Mysterious Death of a Bank Teller”, in Stories from the South Branch.