Let’s see now, what’s happening these days? Well, there’s a problem with the supply chain because there aren’t enough truck drivers available to get food and parts to stores and factories. Not a new problem, but certainly made worse by the pandemic restrictions. What else? Well, we’re about to get away from those restrictions, as more and more countries lift their various regulations. Of course, things in the US are still pretty bad, with only 63% of the people fully vaccinated, and more than 882,000 deaths, with around 3,000 new deaths every day. Not a place you would want to be, all things considered.

And so, a certain number of truck drivers decide this is a perfect time to take hundreds, if not thousands of trucks off the delivery system so they can drive all the way to Ottawa to demand their freedom. Freedom! That’s the cry. Personal choice, not mandatory vaccinations for those crossing the US border. Of course, even if the Trudeau government give in to their demands (mob rule!), it would make no difference, since the US government have the same law in place.

The thing is, that this convoy is composed of more than those objecting to the laws designed to keep them and their fellow citizens safe. There are others who want all covid restrictions removed immediately. The fact that this is happening anyway seems to be make their journey to Ottawa a little less urgent. Then there are the real crazies, as one trucking association leader called them: the ones who want the Senate and Governor General to somehow get involved and remove the Trudeau government. Sounds like a coup, and there are those who have expressed a hope that this rally in Ottawa could be “Canada’s January 6″.

The official organisers of the convoy dissociate themselves from such ideas, and encourage others to report them to authorities. That’s good, and necessary, and maybe even more helpful than most of the Conservative Party’s comments on the situation. But here’s the thing: organisers cannot always keep control of what they start. I am all for protests, as long as there’s a rationale and a clear and achievable end result.

But I am also someone who has been on their share of protests, and I know how easily a crowd with genuine grievances can be manipulated by a small fringe group of extremists. Coincidentally, last Sunday was the 50th anniversary of Bloody Sunday in Derry, Northern Ireland, when the British 1st Parachute Regiment shot into a peaceful civil rights march, killing 14 completely innocent people. In response to that, we in Dublin marched on the British Embassy to protest, about 200,000 of us. In the emotional context, some extremists from the IRA firebombed the Embassy, which burned to the ground as we all cheered happily. Later on, we could appreciate how we had been used. Organisers cannot always control what happens to their protests.

At the time of writing, no-one knows how this whole convoy thing will work out. Will it simply be a peaceful occupation of Ottawa’s downtown? No problem there: people have a right to protest, no matter how vague and unrealistic their demands may be. But if it turns into something else, if the crazies have their way, then thousands of people will have been used, manipulated.

Look, it’s easy to shout for freedom, and some local businesses have gone public with their support of the truckers. But, to repeat the questions above, why is this mandate so much worse than all the other mandates truckers acquiesce in? We can actually see the end of the pandemic restrictions coming soon, so why this demonstration of anger and grievance now?

Part of me is concerned that there are some, maybe many, Canadians who envy the Americans their January 6 Insurrection. They look to the south and want to mirror what they see there, to have their own right-wing militias, their own Fox News fans, their own Trump conspiracy theories in a Canadian context. This is not a ridiculous idea, because that fringe has been happy to spout their rhetoric and hatred throughout the pandemic, and before. Waving the Canadian flag (some upside down) does not make this event any more Canadian.

But this is not the Excited States of America. This is a country with a very different history, different culture, different political system. There is absolutely nothing that Canadians need to envy about other countries and their ways. It may seem more exciting. It may seem that they can adapt American ways to Canadian contexts, but that is a dangerous and damaging belief. Mandatory vaccinations have saved us from polio, for example, even within the lifetimes of people living free as a result. We all put up with mandates, whether it’s speed limits, driving licences, age limits on voting, limitations on foreign travel with passports and visas. We usually accept that these are necessary to keep us safe, to provide security and prevent chaos and accidents and death. We accept them because we know they keep us, and our friends and neighbours safe. We consider those limitations a price we’re willing to pay for that reason. None of us are completely free, as a result, and that we accept. Is that concept so hard to grasp? 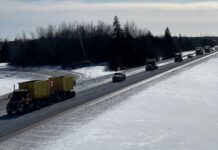