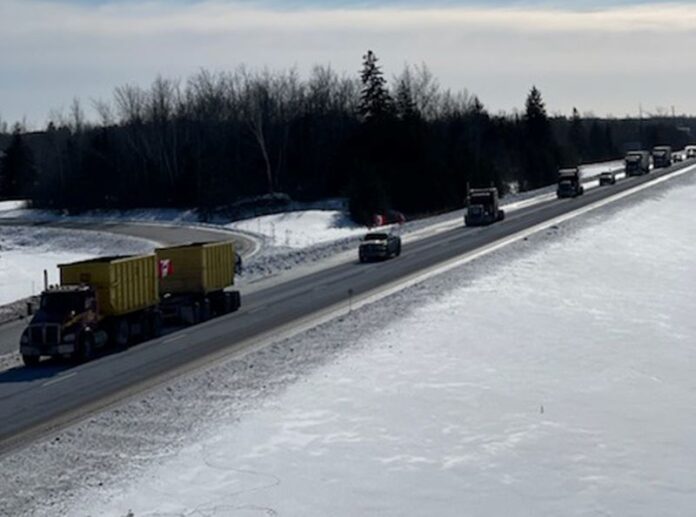 Truckers rallying with the so-called “Freedom Convoy 2022” passed through North Grenville on Friday and Saturday on the 416. The convoy was actually comprised of several different groups of trucks coming from different parts of the country, with some truckers from the USA even crossing the border to join. The convoy started in response to mandates which were introduced in January requiring all those crossing the Canada-USA border (in either direction) to either be fully vaccinated against COVID-19, or to isolate for a set period of time before entering the country. Since isolation periods would cause significant lost income for unvaccinated truckers, the new rules effectively constitute mandatory vaccination requirements for any truckers who move goods between Canada and the USA.

Since its inception, the convoy has evolved into a movement that is intended to be the voice for all who are against government instituted COVID-19 pandemic mandates and restrictions, including mask-wearing, vaccine passports, and gathering limits. The rally has drawn the attention of both supporters and critics globally. The convoy has been the first movement to apply significant pressure on the Canadian and provincial governments in the two years since the COVID-19 pandemic began. The original goal of the rally was to force the government into submission by gridlocking Canada’s capital until all pandemic restrictions and mandates were lifted.

It is not clear as of the time of writing whether convoy organizers and supporters have achieved anything by the time of publication. Police agencies were warning of the need for supporters gathering on overpasses to be careful, given the dangers posed by vehicle traffic when busy roads and large groups of pedestrians mix. Prime Minister Justin Trudeau spoke out against the convoy, calling it a rally by the “fringe minority,” and maintaining that the only way for Canadians to regain lost freedoms is for everyone to get vaccinated. He also referred to the views of the protestors as “unacceptable”, in a media conference. Locally, reactions to the convoy online have been mixed, with many vocally against the movement, and others going so far as to sport lawn signs of support. East of the Municipality, in North Dundas, a smaller convoy of mostly passenger vehicles showed support by trekking down Hwy 31 from Winchester. Like nearly all aspects of the current COVID-19 pandemic, opinions about the merits of the “Freedom Convoy” are unlikely to ever to resolve into one conclusion.