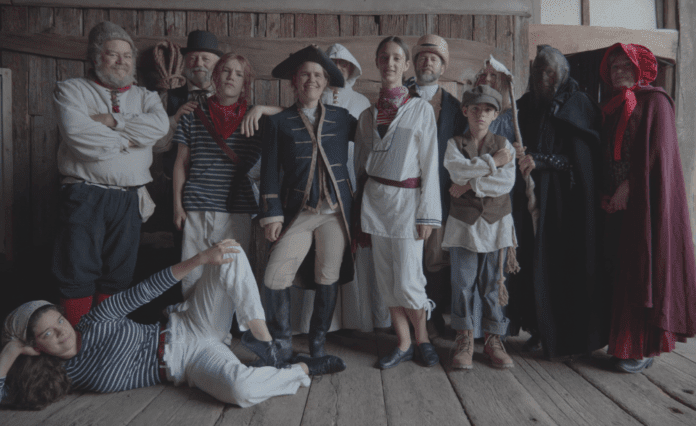 With the re-opening of live music venues, local acoustic folk group Tripoly has been pretty busy of late; but that’s nothing compared to how busy they were last year. During the second year of the pandemic, the trio, along with Geit Productions director, Stephen Fuller, created a short film which they will finally get to release at a concert on Saturday, June 11 in the Burritt’s Rapids Community Hall.

“The idea, originally, was for a simple music video”, explains Doug Hendry who, along with Elizabeth McNally and Glenna Hunter make up Tripoly. “But the idea grew and a storyline developed way beyond anything that we had imagined.”

“We had worked with Stephen Fuller before” says Elizabeth, “so we trusted his creative vision.” However, what transpired was the creation of a movie set which included a run down harbour past its glory days, as well as the exterior and interior of an 1820’s transport sloop, rigging, sail and all.

“We are thankful to the Fullers that we were given free use of a barn in which to build the set, as it really transformed the project into a pretty sophisticated piece and it’s probably the first time a ship has set sail from Newmanville Harbour (on Bolton Rd)!” adds Glenna.

The short film focuses on an agèd mage, embarking on her life’s last voyage, discovering her successor in the unlikely guise of the ship’s youngest crew member.

The 12 minute piece has no dialogue, but rather a soundtrack created by Tripoly, Stephen Fuller, and Rowan Meyer, Glenna’s son, who also acted in the film.

“In many respects, creating the soundtrack was the most difficult experience”, says Doug. “It was certainly a new task to write for specific actions on screen and to write music to carry the mood. But I think we’re all pleased with the result. I have a great respect now for sound in film, and I’m always listening so closely that I sometimes miss the action!”

The actors were all local to the area – some were experienced, and to some it was their first time in front of the camera. “You will certainly recognize some familiar faces”, says Doug cryptically.

The film’s release on June 11 will also feature the trio performing a set of their favourite songs from the folk world and, as well as the film, they will show a gag reel produced by the very talented Theresa Graham (who also acted in the film).

Tickets are $15 ($7.50 for under 16s) and can be purchased from the group’s website at https://fiddleheadsoup.com/tripoly. There may be a certain number of tickets available at the door, but capacity is limited for better spacing, and so it is better to buy online if possible.

The show at Burritt’s Rapids will begin at 7:30 pm and local film fans will have a chance to try to identify all the locations used in the film!