As Remembrance Day approaches, I would like to pay tribute to the amputee veterans who founded The War Amps, which marks its 100th anniversary this year.

On returning from the First World War, they came together to help each other adapt to their new reality. They then welcomed the next generation of amputee veterans following the Second World War, creating the Key Tag Service to provide them with meaningful work and a service to Canadians that continues today.

Recently I joined a young child amputee named Tiffany in laying a rose at the grave of Curley Christian, the only quadruple amputee to survive the First World War. Tiffany benefits from the Child Amputee (CHAMP) Program, just as I did as a teenager following a train accident. We paid tribute to Curley both for his sacrifices at Vimy Ridge and for helping to start a program that has assisted us and amputees across the country.

Though they considered themselves to be “ordinary guys,” these war amputees served their country in wartime and continued to serve when they came home. I can say with pride that their legacy and sacrifices will be remembered through generations of amputees, like Tiffany and me, long into the future. 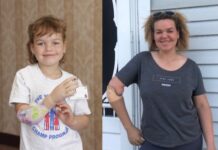