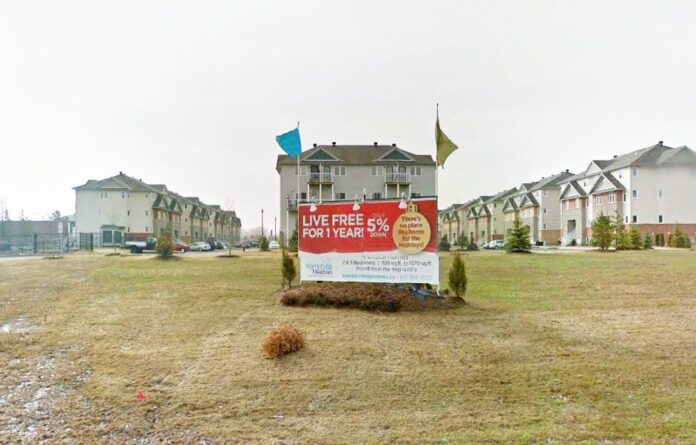 The letter published below arrived at our office last week, and I think anyone reading it will be touched by the contents. It is easy to miss the fact that those affected by the disaster that Kemptville Meadows has become are real people with real lives, facing very serious problems. The sad fact is that the Municipality of North Grenville appear to be part of the problem, as well as the developer and builders of the complex. Litigation proceedings are on-going and no-one involved is in a position to comment publically at the moment. This is understandable.

But the Municipality, under a previous Council, provided this project with generous support by way of delayed collection of Development Charges for a period of ten years. The great guarantee given by the parties concerned was that we, the taxpayers, would not lose any of that deferred money, because the Municipality held the mortgage on the units, and could recoup their investment by assuming title to any units that might be in trouble.

We have published articles in the past about the declining value of these properties, but Ms. Whitaker’s letter is possibly the clearest statement that can be made about the problem. It is a damning indictment of the entire fiasco and the Municipality must take some of the responsibility. Millions of dollars were deferred in Development Charges when the project was first approved (and who approved infrastructure that did not meet the Ontario Building Code?). Can any of those millions be recovered now, and, if so, can they be used to compensate the residents for their losses?

We have some very professional builders in this community: companies that hire locally and use local suppliers. Given the situation at Kemptville Meadows, can the Municipality not enforce conditions on future projects, such as insisting that these local builders are given preference, as long as they continue to support other local contractors? Can we not assert more control over the planning of developments like this, and not be conned into doing deals that appear set to cost the people of North Grenville a great deal of money?

We may have to accept that, as the letter implies, any resolution of the current legal issues surrounding Kemptville Meadows may never be made public, and it is even possible that no-one will be brought to answer for what has happened there. That would be a scandal. But can we not make sure that this never happens again in North Grenville, and that, in our rush to develop and grow, we don’t allow sub-standard work to be accepted?

There will be those, some in the Municipal centre, that will object that this is written without a full understanding of the facts, that we don’t know what the real story is. If that is the case, then tell us the full facts. We can only judge on what we know, what we’re told. And, to be perfectly honest, I find Candy Whitaker’s letter far more impressive, convincing and honest than anything we have heard elsewhere.

Sooner or later, the residents of Kemptville Meadows need to be given the full story. They deserve some justice. The rest of us deserve to know what our municipal staff have been doing about it all, and what has happened to our taxes. It’s called Responsible Government.

I am an owner of a condo, and live at Kemptville Meadows. What has happened to the place I call home? Does anyone care?

I am 76 years old and purchased a home here hoping I would be here for my later years. Many owners were told, owning these homes would be cheaper than renting, that they will build equity for us.

These homes were specifically built for low to middle income, with the 2nd mortgage from HOA (Home Ownership Alternative) made it possible for many to afford to buy. This mortgage did not have to be paid until you sold your unit. Interest would be added when the sale took place.

What happened to this affordable housing project? That the previous Mayor of North Grenville publicly stated that: “Kemptville Meadows was to be the model for affordable housing, and other Municipalities and Townships will follow”.

Owners cannot sell without losing a lot of money and, if they rent, they would still be responsible for the fees and property taxes. If they sell at these low prices, they would still have to pay some of their mortgage. So they stay or walk out!

What has happened to the place I call home? What went so wrong?

The North Grenville Times has spoken about the water leaks, but do you know that four major water leaks happened within one year, and within the first two years of moving in, four leaks in a brand new development. How did this happen?

The broken pipes were fixed, and two reports were sent to owners, between the two companies that fixed or investigated the leaks eight curb stops were uncovered.

Both of these reports state that the curb stops were not installed by the Ontario Building Code OPSD 1104.010. The curb stop from the reading I have done, is the most important apparatus of the water pipe installation as it receives the water from the township and sends it to the homes.

At the Condominium (owners) AGM in May 2016 owners were told there were problems with the Keller report as the Municipality, it seemed, had their own building code for installing curb stops. Can a Municipality override an Ontario building code?

Legal action was started, all parties involved in the development were named, large bills for water overages and penalties came from the Municipality, and even now penalties are being added to our bill. As well owners, have had to pay for the investigation by Keller Engineering and all that went with it, costing around $100,000; this depleted our reserve fund.

We are a small community, to find this kind of money would mean special assessments.

Why should our community pay for something they did not do? OWNERS DID NOT BREAK THE WATER PIPES.

If the parties should make a deal to settle, what happens to our water pipes in the future?

As to be sure if a settlement is made it will state, I am sure, that no blame can ever be cast on the said parties again.

It is no secret that an ongoing investigation by the OPP is being conducted. HOA (Home ownership Alternatives) requested the investigation into what happened to this development. This will take time. It is believed this investigation has nothing to do with the water situation.

So I say again: what has happened to the place I call home? What went wrong?

What is going to happen to this model project for affordable housing? Where even the mayor’s son lived.

Will I and other owners be forever paying special assessments? How can we survive, someone has to care to what is happening here. Young couples and single owners cannot move on with their lives, seniors do not want the worry of “what is going to happen next” as out siders tell us to “just walk out”. How can I at 76 just walk out?

Development charges – what are they?