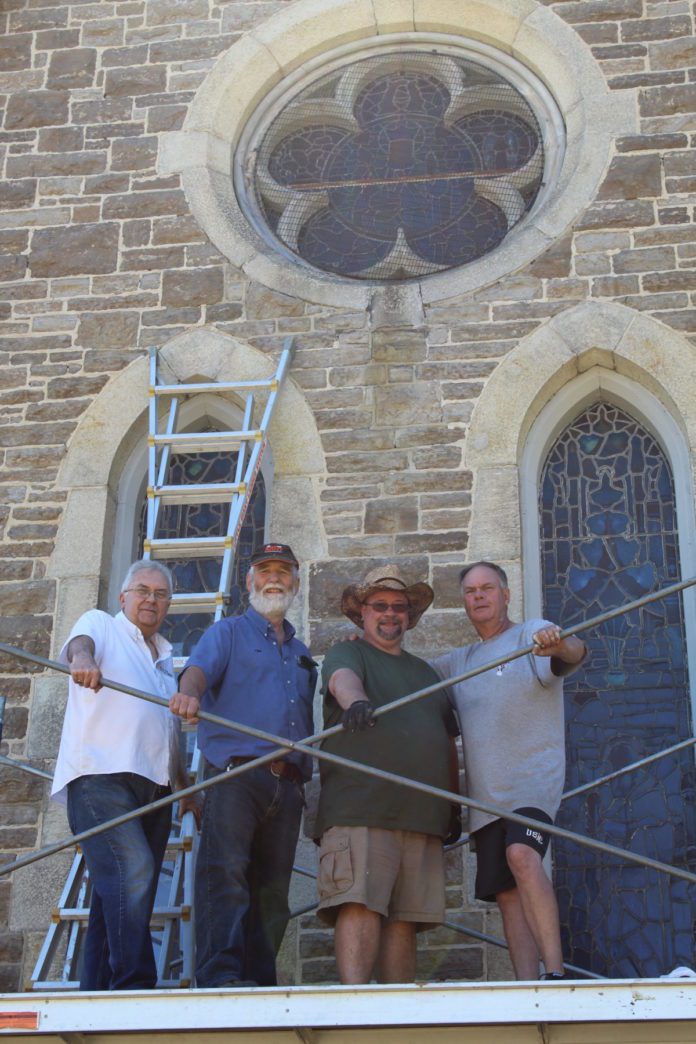 On July 25, 1880, St. James the Archdeacon Patton Memorial Church, designed by distinguished Canadian Architect William Tutin Thomas, was officially opened. On that Sunday, one hundred and thirty-eight years ago, the nave and sanctuary were flooded with sunlight from 28 windows of clear glass set in deep window wells. (Two of those original windows are stored in the church basement.)

Gradually, over the next century, the clear glass windows were replaced by memorial windows of stained glass. Glass of the highest quality created, in the ateliers of Luxfer Studio, Toronto; N.T. Lyon Co., Ottawa and Colonial Art Glass Co., Toronto. Glass of luminosity and intensity of colour: ruby red, sapphire blue, emerald green, turquoise and amber. Glass translucent, opalescent, sand blasted and painted, depicting scenes and themes from the Bible.

People like Squire William H. Bottum, heir to Crown Land Grants, Kemptville’s first Post Master and the man who donated land for the 1827 St. James Church and cemetery. Elizabeth (Bell) Ferguson, mother of G. Howard Ferguson, a Premier of Ontario, and her husband, Dr. Charles Frederick Ferguson, Member of Parliament. Andrew John Kerr, a Captain of the Kemptville Fire Brigade, and James Raymond Eager, farmer and choir member. Both died from Spanish Influenza in the epidemic of 1918/1919.

All memorial stained glass windows, no matter how beautiful, are infused with sadness; none more so than the small window to the north of the altar, which remembers the heartbreak and tragedy of the deaths of high school student Freda Jones to typhoid in 1909 and of her brother, McGill medical student Norman Jones, who drowned in 1910.

The largest window, the magnificent Stannage Triptych, three windows above the Altar, depicts the birth, crucifixion and resurrection of Christ. It is a memorial to John Stannage the sixth Rector of St. James, the man credited with the building of his “little cathedral”, the current St. James.

High on the west wall, the glorious circular “rose” window, with the white dove – symbol of the Holy Spirit, and Man, Lion, Bull and Eagle – symbols of the four evangelists, a gift in 1882 from the teachers and scholars of Robert Leslie’s St. James Sunday School.

As most of the stained glass windows are nearly 100 years old, and some more than 130 years, they were in serious need of conservation work. Led by Associate Priest Robert Porter, a team of volunteers: Tim Aubin, David Brent, Jim Chapman, David Finney, Kate McLean, Dan Spring and John Tilbury, are doing the majority of the work. On scaffold and ladder, the team began restoration of the window frames; first removing protective grills, scraping layers of old paint, repairing damaged wood, sanding, priming, painting and caulking. Weakened areas of stained glass will be stabilized. The exterior surface of the glass delicately cleaned to removed decades of grime. Finally, precisely cut 1/4 inch clear plexiglass covers are fixed to the wood frame. In all, a daunting and, despite the labour of the volunteers, an expensive project. It is estimated the final cost could exceed $7,000.00.

Parishioners are being asked to contribute to a Windows Project. All money raised to be used exclusively for the window project. At $12.00 per square foot, parishioners and friends of St. James are invited to cover the cost of as many square feet as they wish. Charitable donation tax receipts for CRA will be issued to donations of $20.00 or more.
St. James will mark three historical milestones in the next dozen years. 2026 will be the 200th anniversary of the founding of the Pioneer Mission Parish of St. James. 2027, the 200th anniversary of the building of the original St. James in Clothier’s Mill/Kemptville; and, in 2030, the heritage building that is St. James will celebrate 150 years since its official opening on July 25, 1880.

Maintenance deferred puts heritage at risk, for time and the elements are not friends of architectural masterworks. The completed windows now glow as they did decades ago. Let the success of this initiative be the inspiration for work required on roof and limestone walls of St. James.