For most people in North Grenville, Limerick Forest is an area to the south of the Municipality; a place they drive through as a short cut to Prescott, or a place to hunt, ride, hike or toboggan. What not too many people know, however, is that the 1,474 hectares lying across the border of North Grenville, Augusta and Edwardsburgh are only a part of Limerick Forest. In all, the Forest comprises of 5,782 hectares of land in six other Townships in Leeds and Grenville Counties, in addition to the part lying in North Grenville. The largest acreage lies in Merrickville-Wolford, much of it on the eastern boundary of North Grenville south of Highway 43. That section to the south of the Municipality is officially called Limerick Forest South, and it is much more than a forest: it is a ghost town.

The official history of Limerick Forest South states that: “The original part of Limerick Forest, commonly referred to today as ‘Limerick South’, was settled in the late 1840’s by Irish immigrants. One of these settlers, Andrew Forsythe, reportedly settled on a 200-acre tract of land on the northern edge of a forest just south of Bishops Mills. He named the area ‘Limerick’, after his former home in Ireland”. This is romantic, but inaccurate. In fact, Forsythe did not arrive in Canada until 1863, almost twenty years after the Famine.

Although the main road through the Forest is named after him, Andrew and his family were relative latecomers to the area.

The land in that part of the Municipality is not good for farming. Swampy, with thin soil that gradually got blown away by wind and weather once the covering trees were cut down to clear the land, it was one of the last parts of North Grenville to receive settlers. The lot that Andrew Forsythe owned, for example, had been patented to the Canada Company in 1838, but it was not until 1856 that the Company were successful in selling it. It then changed hands six times in the next ten years, before Andrew arrived there in 1868. The family still held it until it was taken in 1939 for arrears of tax. Like so many other families between the World Wars, Andrew’s family watched the soil blow away, sand dunes forming on some lots, as their farms became unproductive. Andrew’s son, Robert, had bought the east half of the lot next door in 1919, and it too fell to the tax people in 1939.

The Ontario Government had become concerned over the deforestation of the Province, and passed the Forestry Act in 1927 to establish agreements with municipalities on setting up reforestation schemes. The United Counties of Leeds and Grenville appointed a Committee in 1939 to report on having a Counties Forest established in Oxford and Augusta Townships. The land owners who were seriously in arrears on taxes, or who had actually abandoned their farms because of the dreadful conditions, had their land confiscated, and the United Counties decided to use these lots as the basis for the new forest.

The Limerick Forest started in 1940, and, as further lots were added over the years, grew to be the large enterprise it is today. Because of the way in which the land was acquired, the Forest is not a single, consolidated block, but is made up of 175 sections in roughly seven separate blocks. The process of tree planting went on for decades. The late Alf Campbell began working at Limerick in the 1950’s, and he remembered that he could stand and look all around him, over the tops of the young trees that had already been planted there. The trees grew quickly and were added to each year. In 1965-66, for example, 177,800 trees were planted, by hand, by twenty-eight workers. The following year, these men planted more than half a million trees, again by hand. In all, nearly nine million trees were planted in Limerick Forest on land that so many settlers had painstakingly cleared in the late nineteenth century, thereby destroying the land they were trying to cultivate. In 1995, the Province ceased their management of the Forest and it was left undisturbed until the United Counties took over management in 2001.

So, as you drive through Limerick Forest (South), or stop to enjoy the facilities it affords in so many ways, think for a moment about those families who used to live and farm the land. The roads they opened, the homes they built, now in ruins, the fences they set up around their land: all these can still be seen in parts of the Forest. These are the mute reminders, the ghosts of the past, the legacy of the Forsythes, the Typhairs, the Tubmans and the other families who once made Limerick their home. 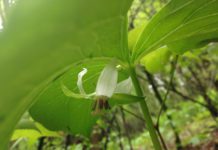 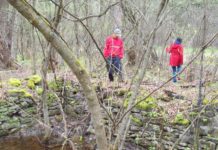