It happens in every election campaign, but municipal contests seem to bring it out even more than either provincial or federal elections. It is the never-ending scourge of the removal, destruction, or vandalism of election signs.

On 17 August 2018, Grenville County Ontario Provincial Police received a mischief complaint. A total of five election signs were stolen throughout the municipality. It may seem a bit of an over-reaction to make a complaint to the OPP about the issue, but, as the OPP themselves note: the removal or destruction of election signs is a criminal offence.

Candidates for municipal elections have to dip into their own pockets, in large part, to have their election signs designed and made. It is a major part of their election budgets, and it takes time and labour to put them up around the municipality. Out of respect for their willingness to stand for election and put their money where their mouths are, it is not too much to ask that residents of the community they are attempting to represent should leave their signs alone.

Of course, these signs are a blight on the landscape, and we will be sick of the sight of them within weeks. But they are a part of our political culture and deserve respect. Remember: the removal or destruction of election signs is a criminal offence.

Anyone with information on the above occurrence is asked to call Grenville County O.P.P. Communication Centre at 1-888-310-1122 or Crime Stoppers at 1-800-222-(TIPS) 8477 or submit your tip on-line at www.tipsubmit.com. Crime Stoppers does not want your name, you don’t go to court, and you could earn cash reward. 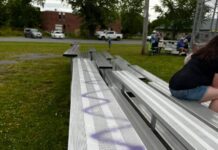 Does Kemptville have a vandalism problem? 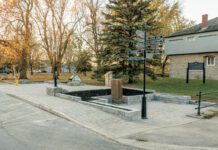