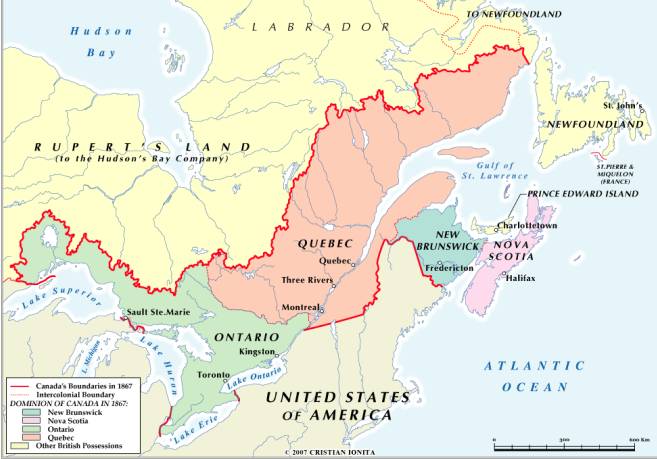 Early in 1863, British Americans were still recovering from the effects of the Trent affair. The British Empire had almost been drawn into a war with the Northern U.S. States, and British Americans were confronted by the stark fact that such a war would be fought on their territory. Worse, it was a war they were completely unprepared to fight. From that time on, the London Government were firmly of the opinion that a federation of their North American colonies was essential and a determination to support any move in that direction became official government policy.

The government of the United Province of Canada was equally effected by the crisis, and John A. Macdonald brought in a budget in 1863 which included a significant increase in funding for the Militia. As is often the case, the main opposition leaders were not as convinced of the urgency, or of the necessity to run what would be the latest in a series of budget deficits in order to strengthen the province’s defences. The continuing fragility of the Canadian political system was underlined again when Macdonald and Cartier’s administration lost a vote of confidence on the budget and resigned.

The new government was a patch-work of various Reform or Liberal members, and few expected it to be any more long-term than previous efforts at governing the disunited United Province of Canada. Ever since the late-1840’s, in order to maintain some cohesion between the two halves of the province, governments had always had two leaders, a representative of predominantly Anglophone Upper Canada, and one from predominantly Francophone Lower Canada. Effectively, there were always two Prime Ministers sharing the position equally. The outgoing regime in 1863 had been headed by Macdonald and Cartier. The new one was headed by another Macdonald, John Sandfield Macdonald, and Louis Victor Sicotte.

Macdonald-Sicotte did not believe war with the Northern States was inevitable: Lincoln’s government, they believed, was too preoccupied with trying to defeat the Confederate States, something a growing number of British Americans believed was an impossible task. In any case, Sandfield Macdonald believed that American anger was directed against the British Government in London, not the one about to move into their new and expensive home in Ottawa. That project seemed more of a crisis than potential conflicts with the Americans. The new Parliament buildings were running more than $700,000 over budget: an enormous sum in 1863 and one which the financially-stressed government was facing with real concern.

The recently-departed Macdonald-Cartier administration had, in the aftermath of the Trent Affair, pushed ahead with another major scheme which had hovered around the edges of British American political life for many years: the Intercolonial Railway. A line of track joining Sarnia in the west with the Atlantic in the east, had been debated and dreamed about, especially by Upper Canadians. Getting access to a winter port within British American territory was seen as an essential, but very expensive, step in growing the economy of the Canada. The governments of New Brunswick and Nova Scotia were less keen, seeing little value in the scheme for them.

But after the forced march of British troops through the wilderness in the winter of 1862 during the Trent crisis, had sown the need for a reliable and fast way to connect the various British colonies that was safe from American interference. A railway line linking St. John’s with the Grand Trunk railhead at Riviere Du Loup was the obvious solution to the Canadians and the British Governments, but not to their colleagues in the Lower Provinces. Hopeful negotiations with the Macdonald-Cartier government had led to what was hoped to be final discussions in London in 1863. But by then, it was Macdonald-Sicotte at the table, and they had other concerns to raise. The growth of Upper Canada, they held, required roads to the west as well as the east. They wanted a road built to the Red River colony (today’s Winnipeg) and a telegraph line to Vancouver Island and British Columbia. Furthermore, they found the financial arrangements being set by the British for funding the Intercolonial to be unreasonable, and they pulled out of the London talks in a most abrupt and apparently dishonourable manner. They simply left without saying goodbye, or announcing their departure. They put it in a letter which was delivered after they left London.

This infuriated the Imperial authorities, and deeply angered and insulted the representatives of the Lower Colonies, a serious problem, given that, very soon, these would be the very people the Canadians would need to convince in order to bring about Confederation and the founding of a new nation.

Letter to the Editor – David Shanahan

Letter to the Editor – Message to David Shanahan