Looking back on twenty years of amalgamation, it is easy to assume that what we see now is what was always going to be; but that is far from the case. Back in 1996, when it became clear that the Harris government was determined to reduce the number of municipalities in Ontario by almost half, it was very unclear exactly what that would mean in Eastern Ontario. It may have been obvious that Kemptville, surrounded as it was on all sides by the Township of Oxford-on-Rideau, was probably going to join with the rural community. In January of 1996, the Kemptville Council agreed that Mayor Ambrose Etmanskie and Reeve Ken Finnerty should meet with the Reeves and Deputy Reeves of Oxford-on-Rideau and South Gower to “explore the possibility of amalgamation of the three municipalities”. It was emphasised, however, that this did not indicate approval of the project, rather it was simply an exploratory exercise.

This was not an unusual move, as the three councils had been having meetings since the previous municipal election in 1994 to arrange co-operation in a range of areas, such as housing inspections for South Gower and snow ploughing for the Town of Kemptville.

But there was no fixed idea that these three municipalities would unite on their own. Invitations were also issued to Merrickville, Edwardsburgh and Wolford to join in talks on possible amalgamation agreements. The Province was leaving it to the local councils to make their own arrangements about amalgamation, so the possibilities were open.
However, in the absence of any response from the other councils, Kemptville, South Gower and Oxford-on-Rideau went ahead and formed a Tri-Council New Directions Committee, made up of the two leaders of each council. There was a sense of urgency in the meetings, as pressure was clearly being applied by the Province to try and have amalgamation arrangements in place before the next municipal election, scheduled for November, 1997. The plan was to have the new municipalities hold their first Council meeting in January, 1998.

In fact, it quickly became clear to everyone involved that amalgamation was going to be a very complex, even messy affair, and there didn’t seem to be enough time available to work through the implications before deals were finalised. The situation was not helped by the traditional rivalries and conflicts which existed between the future partners.
In January, 1996, the Kemptville Council presented South Gower and Oxford with a draft plan, which Mayor Etmanskie assured them was written from a Kemptville point of view but “there was nothing personal in the document”. Nevertheless, South Gower Reeve, Joan Williams Birch, was “disappointed” that Kemptville had gone ahead with their own plan, when the Tri-Council Committee was meeting regularly, and could have drawn up a plan using input from all three municipalities.

Reeve Birch stated that her council wished to explore other options, not just amalgamation with the other two municipalities. How would the new amalgamated body deal with Kemptville’s debt and high taxes? Would South Gower and Oxford have to help pay for water and sewer services in Kemptville? If the rationale for amalgamation was saving money and cutting staff, would uniting the three communities achieve that, and, if not, what was the point?

Many important questions needed to be answered, but the push to amalgamate, coming from the Province and the Counties, made many in all three communities more than a little anxious about what was coming. The rest of 1996 would see good reason for their concerns. 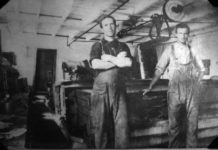 The central role of cheese