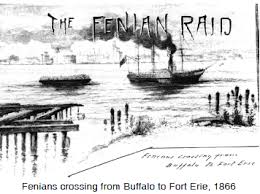 In the summer of 1866, as British America moved slowly towards Confederation, one threat which had been hanging over the provinces for years seemed to have been lifted. The American Civil War had ended in 1865, and the long-feared invasion of the victorious Union forces into Canada had not materialised. The Americans had found their hands and energies more than occupied with Reconstruction and the Americans had seen enough of war.

Ironically, at the same time, another and more imminent threat of invasion had arisen as a result of the end of the war. The Fenians were a republican and revolutionary organisation that had been founded in New York in 1858 with the stated aim of freeing Ireland from British rule. Before 1865, they had remained mostly a talking and blustering group, but with the demobilisation of thousands of Irish soldiers from both Union and Confederate armies, they became a formidable threat. The Fenians experienced a bitter split in 1865, with a large section declaring that their aim was to invade Canada and force Britain to negotiate terms for Irish freedom.

This might seem a thoroughly ridiculous scheme now, but a report by British and Canadian governments in 1866 concluded that the western half of the Province, what is today Ontario, was practically indefensible, given the military budget and manpower available. When, therefore, a party of more than 1,500 battle-hardened and disciplined soldiers crossed the Niagara river into Canada on June 1, 1866, the fear and alarm that swept the country was understandable.

That size of invasion force, again, may seem lacking in threat now, but, given the population of Upper Canada in 1866, that would be the equivalent of an invasion force of 15,000 soldiers today. As it happened, the Fenians won the only engagement that took place. At Ridgeway, they succeeded in defeating a force made up largely of Canadian militia, but then had to retreat back across the river when the American Government closed the border, denying the Fenians reinforcements and supplies.

The effect on the Canada of 1866 was immense. For decades afterwards, the new Canadian Government, and most especially its Prime Minister, John A. Macdonald, were constantly alarmed by reports of new Fenian movements on the border, and finds of arms dumps in the major Canadian cities. Strange as it may seem, the last time Canadians died defending Canada from invasion was in 1866, and the invaders were Irish.