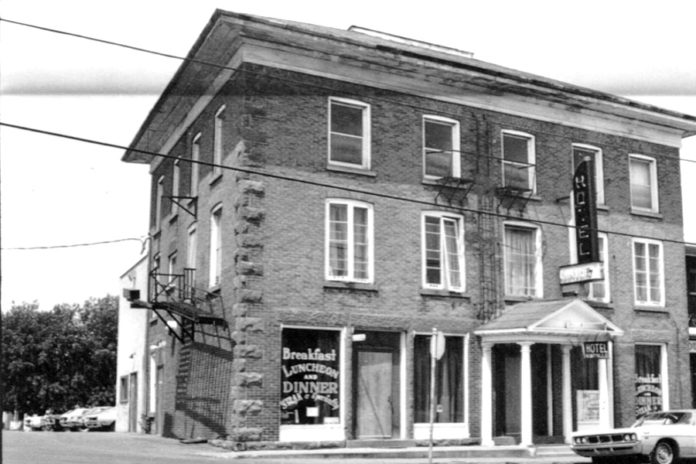 Although it was generally known as a hotel, this building dates from 1861, and only served as a hotel for a few decades from 1941. It was the site of Lyman Clothier’s first home after he built the mill that gave life to the new village around 1819. In 1861, this brick building replaced the earlier house. It was made from bricks which were made from clay taken from the north bank of the South Branch just below Bridge Street, land owned by the Clothiers. It seems, though, that the expense was too much for the Clothiers, and they had to take out a mortgage on the building in 1868. They defaulted in 1878, and Henry Dell took over possession. He ran a public house and feed store there for many years. Originally, there was a cupola on top of the building that people used to climb to and get a view out over the entire village.

Henry’s son, Edward, took over running the business and the Orange Order had lodge rooms upstairs from about 1880. James Fairbairn took ownership in 1912, but the actual occupant between 1910 and 1940 was Joel Anderson, who used the building as his private residence. Charles Graham bought it and, on January 15, 1941, opened the Graham Hotel.

Charles Graham made many alterations in the structure to make it useable as a hotel. He removed the cupola from the roof, and the hotel contained 17 rooms, according to publicity for the new business, “a number of which will have hot and cold water installed”. The hotel had both heat and electric light, for which the building had been newly wired, and a fire escape ladder was built on to the side. To celebrate the grand opening, Charles and his wife supplied a full turkey dinner to those attending the event.

Charles didn’t enjoy his new venture for long. By 1946 he had died and his wife sold the hotel to Albert and Mary McKeen. The renamed McKeen Hotel continued to do a good business until it was sold in 1967 to a company which operated it as the Kemptville Hotel.

Today, the building has changed little from the days of the Clothiers. The fire escapes in front and at the side are gone, and a large yellow canopy has replaced the older porch over the front door. The days of drinking, appearances by Stompin’ Tom Conners, and a late night sessions have been replaced by, at various times, the Chamber of Commerce, accountants, and other healthier uses.