The announcement appeared in the local newspaper on December 22, 1898: there would be a meeting to establish a new Horticultural Society in Kemptville. “The necessary number of signatures for membership having been received”, the Town Hall on Water Street would be the venue for the meeting on Wednesday, January 11, 1899. In addition to those who had expressed interest in the new organisation, the public “in general” were invited to attend.

It is interesting to note that the organisers were all women, but the inaugural meeting that January evening elected a man, Reeve Angus Buchanan, as President, and the Secretary and Treasurer were also men. The only one from the original organising committee to be elected to the Board was Mrs. A. Bowen, who was elected First Vice-President. One other woman became 2nd Vice-President, Mrs. John Sanders. Yes, in those days, and for long afterwards, married women were called by their husband’s name, not their own. But Mrs. John Sanders was Susannah, nee Barnes, who, at the time of her death in 1919, was “probably the oldest native-born resident of the village” of Kemptville.

The Horticultural Society came under the Agriculture and Arts Act of Ontario, and had to be officially sanctioned by the responsible provincial Deputy Minister of Agriculture, C. C. James. By-laws for the new Society were passed in March, 1899, by which time more than 1,000 trees had been distributed to the members for planting. But the Society did not prosper, and fell into inactivity by 1903.

It was not until April, 1920, that the Society was revived and began its second lease of life. This incarnation of the Horticultural Society received encouragement from the financial support it received from the community and government. Local M.P.P., and soon to be Ontario Premier, chaired the first meeting, was elected Honorary President, and donated $25 to the Society. The Province granted another $25, as did the Kemptville Women’s Institute. The Village Council gave $10, and membership dues amounted to $118. These were significant amounts in 1920.

This period lasted for nine years, and each year the Society held a Flower Show, which attracted over sixty entries in its first year alone. The Society carried on projects to beautify the village, including the Public School Grounds, where the B&H now stands, the tennis and bowling grounds in Riverside Park, and the river bank behind the Town Hall.
These projects didn’t all work out as planned. The flower beds and trees envisaged for the Public School grounds had to be put off until “the area was fenced to keep out livestock”! The river bank behind the Town Hall was used to store machinery by the Village, so there was little the Society could do to beautify that area. Membership drives and a banquet at the Kemptville College involved the Girl Guides and High School students, and usually led to a sizeable membership list of up to 318 at one point. All in all, it seems to have had an active and productive company, but when it folded in 1929, it would be another twenty-three years before it would rise again.

In the meantime, an attempt was made to start an Oxford Township Horticultural Society in 1923. A first meeting was held at the Town Hall in Oxford Mills on Monday, April 9, 1923, at which the local Agricultural Representative, W. M. Croskery, gave an illustrated talk, and a number of musical numbers were presented by those in attendance. Nothing more seems to have happened, however.

But, in Kemptville, the Society rose up once more. In April, 1952, at a meeting held with just ten people in attendance, activity resumed. It was a newcomer to the village who initiated the rebirth. E. H. Jones had recently moved to Kemptville after his retirement from the staff of Macdonald College in Montreal’s Horticultural Division. The Society grew and prospered, continuing the beautification projects of its predecessors, and even having an exhibition at the Central Canada Exhibition in Ottawa. In 1954, the Society played host to the Ottawa and District Gladiolus Show in the basement of St. John’s United Church on Prescott Street.

There were many other events and activities over the years, including, for example, a Society Banquet in the Kemptville Town Hall in 1970. An Anglican priest was the guest speaker, as well as providing the blessing at the meal. Doing laudable double duty, he then spoke on the art of flower arranging, making some half dozen arrangements as he spoke.

Today’s Horticultural Society continues a long tradition of beautification, promoting beauty and artistry, as well as a sound scientific approach to their work. 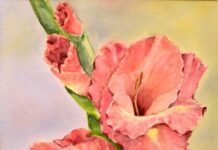 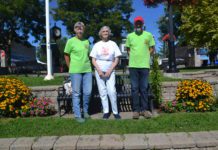