I don’t know about you, but I’ve always liked small town downtowns. Whether it be on a day off when I was a camp counselor in Parry Sound, or a trip into Picton from my cottage in Prince Edward County, I always enjoyed the architecture of the buildings, the unique family run stores, and the coffee shops that didn’t have the highly mechanized structure of Starbucks. I believe old downtowns in Ontario are one of its greatest assets;  however, it is no secret that many a Main Street has fallen on hard times.

Downtowns used to be the heart of the small town. It was where people went to get groceries, pick up prescriptions, shop for new clothes and socialize. Stories were swapped in the bread aisle, friendships were made, and communities were strengthened. Unfortunately, with the rise of big shopping malls and more recently the entrance of big box stores into small communities, convenience has trumped tradition. The one stop shop that Walmart offers is attractive in today’s society which is increasingly fast paced. Time is of the essence, and the social aspect of discussing current events and local news while picking out oranges is not a priority. That’s what Facebook is for, right?

Downtown Kemptville got the news this week that the LA Group has officially begun construction on the Kemptville Landing Condominiums. It is hoped that this is the project that will help kick start business in the downtown core and breathe new life into Prescott Street. When you look at how other towns have combated the decline of their downtowns, it looks like development is a good thing. The building of the First Ontario Performing Arts Centre and the Meridian Centre in downtown St. Catharines seems to have been the catalyst of change for businesses in the area, which if you visited the area  ten years ago was suffering just as, if not more than, Kemptville. “People are talking about Niagara again,” writes Mario De Divitiis, the director of Leadership Niagara in the St. Catharines Standard.

Kemptville Landing is not a performing arts centre, but it is a development that will bring more residential density to the downtown. The revitalization of old downtowns is not a new concept and has been studied thoroughly over the years. A report put together by the Business and Economic Development Services at Utah University in 1986 includes housing as one of the keys to a successful downtown. They include four essential elements in healthy cities and towns of any size: adequate housing, availability of necessary goods and services, recreation and industry. According to the report, the most exciting and successful downtown areas have at least three of these elements in close proximity to the core.

If you look at downtown Kemptville, most of these (except industry) are present. With the exception of a pharmacy, almost everything you need can be found downtown. Clothing, groceries, a bank, the post office and restaurants can all be accessed on foot along Prescott Street, Clothier Street and into the triangle. So what is keeping the downtown from living up to its potential? Poor planning for pedestrians could have something to do with it. The report also talks about having adequate sidewalks and crosswalks so pedestrians feel safe from traffic while walking around town. If you know how to cross the T intersection at Clothier Street and Prescott Street without fearing for your life, please let me in on your secret. John Barclay, the Executive Director of the Old Town Kemptville BIA, says they have been trying to get a crosswalk there for months, but there is a lot of red tape. Unfortunately, Clothier Street is a County road and the County has it on its list as a low priority.

This brings me to another important factor in the revitalization of downtowns; cooperation. Public and private sectors need to work together and use their strengths to leverage what needs to be accomplished. Leadership from organizations that represent businesses (like the BIA), and support from government in terms of policy, can be the difference between dreams for revitalization becoming a reality and existing in a stalemate of differing priorities and opinions. Cooperation from the Chamber of Commerce, which is supposed to promote business in the area, is also a bonus. However, as we are seeing with the North Grenville Chamber of Commerce who refuses to throw any financial backing behind downtown revitalization efforts, oftentimes their focus is on supporting businesses as a whole   area, and the financial centres are no longer in the old downtown but along the large county roads and highways.

Some other key areas that are outlined in the report are parking, restoration and upkeep of historic buildings, beautification, promotion and merchandizing. It is unrealistic to think that old downtowns are going to return to the centre of most people’s everyday; therefore, it must not only have an adequate amount of goods and services but also be a pleasant place to be. Businesses themselves can play a huge role in this by ensuring that the customer experience is superior to anything they could get at a big box store. Personally, I choose to get my coffee at Geronimo’s on Prescott Street because of the friendly staff and laid back atmosphere.

As you can see, there are so many factors that play into the success of the revitalization of an old downtown. I’ve probably only mentioned half of them. Despite the large amount of work and the significant investment that needs to be made in downtown Kemptville, I truly believe that it is worth the effort. The Walmarts of the world are all the same, convenient but boring. It is in the streets of a town’s old downtown where the history, character and heart of a town really live. I hope that Kemptville Landing will do for Kemptville what the arts centres did for St. Catharines. Get people excited about downtown Kemptville again. 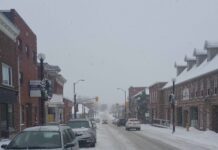 Not on the radar