In a series of interviews with candidates in next month’s federal election, the Times sat down with Josh Bennett of the Liberal Party. 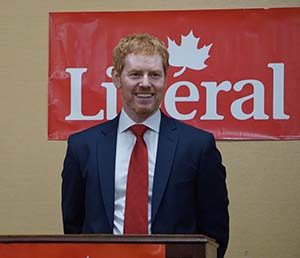 Josh: A by-election is a different animal. You get lower voter turnout, and the Conservative demographic will always come out to vote. The Conservatives don’t need to work that hard to get their vote out because their voters vote. They tend to be an older demographic. So, therefore, in a by-election, if you’re not a Conservative, you’ve got a much bigger hill to climb. In the last election, voter turnout went way up, and the Liberal Party benefited from that. That is a trend: you see that nationally, and you also see that here in this riding. Gord Brown’s percentage vote went way down at the last election, compared to 2011; but his vote count went down only a little bit. As a Liberal, then, I need to get the vote out. I need to convince the younger demographic, especially, that it is important to vote. That is partly why I got involved in politics in the first place: to get my generation out. I’m 43, and lot of people my age are starting to wake up to think: “Maybe we should vote? Maybe this is important?”

I think there has been in my generation, an attitude of, “Oh well, it doesn’t really matter. It doesn’t matter who we elect, nothing will change.”

NG Times: That seems to be changing here in NG. New people are moving in and not seeing things the traditional way. Do you see that as you go around the riding?

Josh: There’s definitely some change. North Grenville has had the largest population growth and the largest demographic change. NG is now the second-largest municipality in the riding, by a significant amount. Brockville has always been the largest, at 20% of the riding, and NG is 16%. I think that, in the last election, NG was closer to 11%, so that is a huge growth in just four years. NG is a different trend. We have younger families here because it’s in commuting distance from Ottawa and jobs in the Ottawa area.

And I think that one of issues that resonates is jobs for young families in this region. I had to leave this area to find meaningful work, to find good employment. I lived and worked in Toronto for ten years in market research. I eventually convinced my company to let me work from home. They were spending a lot of money on a downtown Toronto office for me, and that’s a lot of real estate money. 95% of my job is me sitting in front of a computer and a phone, and a lot of my clients aren’t even in Toronto any more. Eventually, they let me work from home.

So, I brought my Toronto salary to our community. Now, imagine we could times that by 200. Imagine we could have 200 families who are coming back to this region, who grew up here and who want to raise their families here. Of course, not everyone wants to work at home, in isolation, we are social beings. I foresee a time when we have virtual offices here in Kemptville that people can work at, be close to home, close to their families, and not waste a lot of time commuting. With the technology, I think this is something we can achieve.

In my own experience, because I wasn’t wasting time in commuting to and from work, I could join the Rotary Club, I could be involved in the community, I ran the Santa Claus Parade in Brockville. And my productivity at work went up because I was happier, I worked better.

We need diversification of jobs. People working at home gives us that, and gives young people an option to stay in the area, if they so choose, rather than being forced to take a city job.

NG Times: Why vote for you, rather than the Conservatives, when many of your ideas are similar to Michael Barrett?

Josh: I would say that the Conservatives have become much more right wing than they used to be. When I was a Conservative, there were leaders like Jean Charest, Joe Clark, and Peter MacKay. I stuck around the new party for a little bit, and then decided to leave. They were far too focused on winning elections, and not enough on public policy. A great example is the price of carbon. This was originally a Conservative idea. And, in my opinion, it’s a good idea, a market-driven policy, a market-driven solution. Now that the Liberal Party has implemented it, if I was still a Conservative, I would take full credit. But they don’t, they turn around and call it a job-killer.

I feel people, and my generation in particular, are getting tired of party politics. There is a movement to just focus on good ideas. Having the party system is something that democracies need, but, at the same time, I would like to see more free votes in the House of Commons. More discussion of policies, rather than personal attacks. I think that, when we focus on that, we can do good things.

If I become the Member of Parliament, I’m going to work with my colleagues across the floor, because my main focus is to do the right thing for our area, not just attack whoever the leader of the Conservatives is, or the leader of the NDP. That doesn’t really serve Canadians, or the citizens of Leeds and Grenville. That’s a primary focus for me. 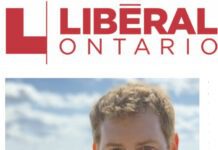 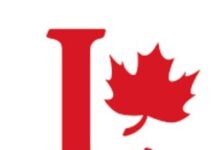