Not too long ago, people were arguing passionately about whether Global Warming was real or not. Now that we’ve switched to calling it Climate Change, the discussion has moved on somewhat. Given the radical changes in the climate areas around the world, it is very hard for anyone to deny that change is happening. Look at some of the facts: there has been an increase in the number and severity of major weather events, such as hurricanes, volcanic activity, floods, wildfires, and droughts around the world.

In Ireland, for example, last November and December were considered to be the coldest on record, while this June and July set record highs as the country imposed restrictions on water use by residents across the country. A newspaper headline last week stated that “The drought conditions are set to get worse, and the country is now on high alert for wildfires”. This is unprecedented.

In the United Kingdom, likewise, Scotland recorded its highest-ever temperatures in early July, and it was the driest June on record in parts of England. It was also the warmest month on record in Wales and Northern Ireland. So, it is not just in North America where weather patterns have been disrupted and extremes of temperatures have swung us from drought to flood conditions.

The big question has been: is this a natural change in climate, as we’ve seen throughout recorded history, or is it the result of human activity? We know that Europe experienced what is called a “Little Ice Age” between around 1550 and 1850, during which time rivers like the Thames in England froze over in winter. Crops failed and new types of farming had to be introduced, while significant population loss was experienced throughout the continent. But we also know that these changes were experienced in other parts of the world also, including New Zealand and South America. New York harbour froze over in 1780, and glaciers extended their reach in many areas.

So, is this experience of climate change simply a natural, albeit nasty, cyclical event? Or is it also caused, at least in part, by our use of fossil fuels, etc.? In many ways, I suppose, it may not really matter. The facts are clear: things are changing and those changes will have a serious effect on how we and future generations live on this planet. There seems to be a general acceptance that it is too late to completely reverse these changes, especially if they are a natural phenomenon; but, at the same time, we should certainly be looking for ways in which we can minimise the damage and the effects.

The biggest obstacle to achieving any kind of amelioration of the effects of climate change, whatever its cause(s), seems to be our unwillingness to put ourselves out in any way. In other words, while we may know on one level that things have to change, on an everyday level, we don’t want to. We prefer convenience to saving our future, it’s as simple as that.

There are, of course, economic reasons why the necessary changes are difficult for many of us. Shopping locally, and living a more ecologically-sustaining lifestyle, can be expensive, more expensive than some of us can afford. We may want to buy locally-sourced products, but things in WalMart (or across the US border) are cheaper. Electric, or even hybrid cars may be good for the environment, but they are still beyond the average customer’s means. The Ontario Government may be making changes to Hydro One and promising to lower hydro costs by 12%, but the fact remains that cheaper electricity alone will not replace “dirty” generating plants with renewable energy sources.

Inter-provincial trade barriers in Canada are a nonsensical aspect of the Canadian economy, preventing the best use of our natural and manufactured products, but ending them is politically fraught. On the one hand, governments need to co-ordinate matters to ensure the most efficient response to changing conditions. On the other hand, government regulations can be just as damaging and more of an obstruction than anything else.

So, is there an answer, a solution,an effective response to climate change and its inevitable impact on our world and local community? Not so far. Before that can happen, we, as a society, will have to address the issue more seriously, constructively, and realistically. It would be easy for those of us of a certain age to be complacent and declare that it’s our children’s problem. Easy, but really immoral. But we need to ask questions: what is really happening, and why? What can we do locally to deal with it, or live with it? How much are we prepared to adapt, before we die from our own resistance to inconvenient truth? 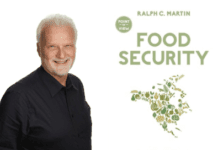 Adapting to a Future of Disturbances