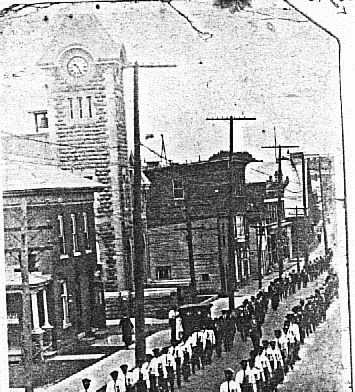 This is yet another important site in Kemptville’s history that hides its past well. The first school house in the area was opened here in 1822 and run by Reuben Chase for over 20 years. The land was donated by Asa Clothier, who retained ownership until the school closed. The site was occupied by the Holmes family for many years, and one of the Holmes daughters married Samuel Martin, a photographer. Before the Great Fire in 1872, Martin’s Photography occupied the site, and was rebuilt afterwards, an early pioneer of the business. An even more modern studio was opened here by D. Edson Pelton, in 1895. After his death in 1901, the business was continued by his brother. The fine brick building to the left of the Post Office in the picture, was built by Dr. David Wallace as a residence, and was later the home and office of Dr. G. D. Gordon, who came to Kemptville in 1919. The parking lot for the CIBC was the site of Dr. Gordon’s garage, a stable for his team of horses, and storage sheds. The property was bought by the Canadian Imperial Bank of Commerce in 1980 and the residence was replaced by the bank building that stands on the corner today.

Run for the Cure