On Saturday, May 27, my wife and I participated under the team name “Headhunters” in the “Walk for Alzheimer’s ‘Make Memories Matter’” in Brockville. We would like to sincerely thank all of our friends, family, and local businesses who dug into their wallets to provide sponsorship to our team. This walk was held simultaneously with walks in Gananoque and Smiths Falls. In Smiths Falls, the walk raised more than $18,939 this year; in Brockville $8,528, and the Gananoque walk raised $6,740 for a total of $34,107 by the 140 walkers.

All the funds raised by these walks are used for support programs for clients and Caregivers of people with Dementia. Dementia is not a specific disease. It is a descriptive term for a collection of symptoms that can be caused by a number of disorders that affect the brain.

There are obviously different causes for these different manifestations and some people have what is called Mixed Dementia, which means that they have Alzheimer’s along with another type of dementia. My wife was diagnosed a few years ago with Vascular Dementia as a direct consequence of a Brain Aneurysm that burst about 13 years ago and, more recently, the Elizabeth Bruyere Memory Clinic has told us that she is now showing sign of developing Alzheimer’s Disease. This was not an easy diagnosis to come to terms with, but life does go on and people can, and do, live productive lives while coping with Dementia.

The previous two paragraphs are to show how important the funds raised are to us, and how we have a very close connection to the Alzheimer’s Society and the work they do to support people living with dementia and their care givers, while living in their own homes.

We have been really encouraged by the support that the people in North Grenville, and specifically Kemptville, have shown us as we solicited donations for our team. We managed to raise $2,800 from the kind people in our community, as well as friends and family farther afield. Saying thank you, or sending an email, did not seem adequate, so we wanted to publically say “Thank You” to all our family and friends and the generous people in Kemptville for the loving support shown to us. 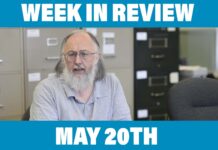