A resident of North Grenville, and founder of an NGO, is asking the community to create their own unique way of raising money to support a new women’s hospital in Cambodia. Originally from Brockville, Janne Ritskes started Tabitha Foundation Cambodia in 1994, after working for several other NGOs for many years. At the time, 90 per cent of the people in Cambodia were living in huts and the country was still reeling from the devastating effects of the Vietnam War and the rule of the Khmer Rouge, who were responsible for one of the worst mass killings of the 20th century.

The Tabitha Foundation started small, helping impoverished people see the benefit of savings. Janne says that, as their savings grew, she saw their world open up as well. “They have a chunk of money, but also much bigger dreams,” she says. “We bring them from poverty to middle class in Cambodia.”

As the Foundation grew, they started facilitating cottage industry in Cambodia, specifically the production of silk products. The art of silk weaving runs deep in the history of the country and Tabitha Cambodia facilitates the industry by paying workers a fair price for all their products, as well as providing training, employment and income. “We teach them the value of the resources and the skills they already have,” Janne says.

Tabitha Cambodia facilitates a house-building program, supported entirely by volunteers, which has built 13,000 houses to date. They also provide potable water sources like wells and ponds to areas in need and have built 2,000 schools with 2-3 more constantly in progress.

The Foundation’s most recent and ambitious project has been the building of a new hospital for women in Phnom Penh. Janne says she was inspired to build a hospital to provide much-needed care to the women in Cambodia after her own battle with breast cancer in 2010. “I wanted to make sure the women in Cambodia had the same access to care that I did.”

The culture in Cambodia sees women as third-class citizens, and many don’t receive proper health care. “[Many women] have gynecological issues by the time they are 13, and cancer by the time they are 30,” Janne says. “They don’t have anywhere to go.” Nokor Tep Women’s Hospital was specifically built to address women’s gynecological issues and cancers such as breast, uterine, cervical and ovarian cancer.

The hospital was built entirely on fundraising dollars and was completed earlier this year. Local labour and materials were used wherever possible, and Janne says they trained locals to work in the trades needed to get the hospital up and running. Soft colours were used inside to make the environment more welcoming, and all the staff are trained to make the women who enter the facility as comfortable as possible. “They make sure [patients] know exactly what they are doing, and they get all their results,” Janne says. It is a safe haven for women, who are often abused by their male partners or family members. “Men can come into the reception area only,” Janne adds.

Having just bought a house in Kemptville, Janne now spends half the year in Canada and half in Cambodia, helping to run the NGO. The hospital is always in need of funding to cover operating costs, but they are also in need of some specific items that they haven’t yet been able to purchase. This includes solar panels (an efficient and cost effective way to power the hospital), CT Scan, Laprascope elevators, laboratory reagents, and much more. Janne says their goal is to raise $1 million in the next six months.

So, she is asking the residents of North Grenville for help. The challenge is simple. Design your own personal challenge which you will work at for the rest of the year, while raising money for the cause. Several people have already hopped on board, with local business-owner, Cora Beking, committing to walk 1,000km and raise $10,000 by the end of the year. Resident, Jennifer Ritskes, has also set her own challenge of riding 5,000km on her motorbike, with the goal of raising $5,000. Even the North Grenville Times’ own Marguerite Boyer has committed to doing her physio ever day until the end of the year.

The nice thing about this fundraiser is that it can be whatever you want it to be. Pick a task you enjoy doing, set a fundraising goal, and make a plan for how you can achieve it. “I’m going to be washing 1,000 dishes,” Janne says.

To sign up for the challenge or for more information you can contact Janne at [email protected]. To learn more about Tabitha Foundation Cambodia, visit their website at www.tabitha-cambodia.org. 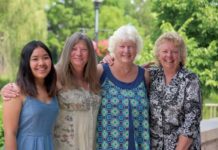