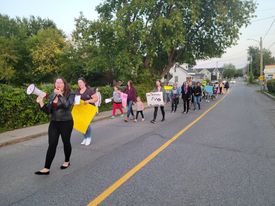 The event began at Rotary park where several community members shared their experiences and why this stand against violence is important to them. Mayor Peckford offered opening remarks. Speakers from other resource centres, such as Cecilia Clapson-Anderson, Interim Executive Director for Victim Services Leeds Grenville, Amber Cauley, Peer Support Worker from Assault Response & Care Centre, and Julia Nagy, a Peer Support Worker from Naomi’s Family & Resource Centre, were there to offer an outreach to anyone in need of support.

“Take Back the Night” is an international event and non-profit organization taking place across the region over the next few days. The march began as a way to protest the violence that women experienced while walking in public at night. The purpose of these marches was to speak out against this violence and raise community awareness as a preventive measure against future violence. The mission of Take Back the Night has since grown to encompass all forms of violence against all persons, though sexual violence against women is still the top focus. The word night was originally meant to be taken literally to express the fear that many women feel during the night, but has since changed to symbolize a fear of violence in general.

If you or anyone you know is in need of support, please reach out to Victim services. The website for more information is www.vslg.ca