The feedback is in and it appears the Linking Hands Basic Income Forum was a success! More than 30 people attended the Friday, June 9 all-day event, which was held in Winchester’s Joel Steele Com-munity Centre, with roughly 90 per cent of attendees giving a positive overall event rating.

The forum opened with a presentation by author Melanie Willard focusing on “Resilience of the Human Spirit.” It was followed by Basic Income presentations from Rob Rainer and John Stapleton. Following a luncheon catered by Leatherworks, Richard Shillington joined the two presenters for a discussion period with the audience.

“According to the feedback survey distributed following the event, the majority of guests found the presenters to be well-prepared and knowledgeable, as well as passionate and committed to their subject matter,” Sandy Casselman said. However, there was a small gap in the forum, as there was one person who had been hoping to hear thoughts from those opposing the implementation of Basic Income. But, the discussion is not over, Sandy said, but rather, just beginning.

“Linking Hands will be launching its seventh working group, Financial Health, in the near future,” she added. “This group will examine a variety of topics surrounding financial health, including current trends and concepts (such as basic income, a living wage, and more); financial literacy training and support; education and training around essential skills; advocacy work; and more.”

For more information or to become involved, visit www.linkinghandsdundas.ca or contact Sandy Casselman at [email protected] or phone 613-989-3830.
About Linking Hands

An outreach initiative of The House of Lazarus, Linking Hands is dedicated to reducing poverty in Dundas County. It is directed by a community-led steering committee, with sub-committees called working groups, focusing on a variety of projects. 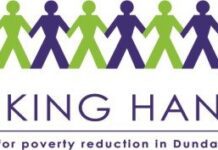