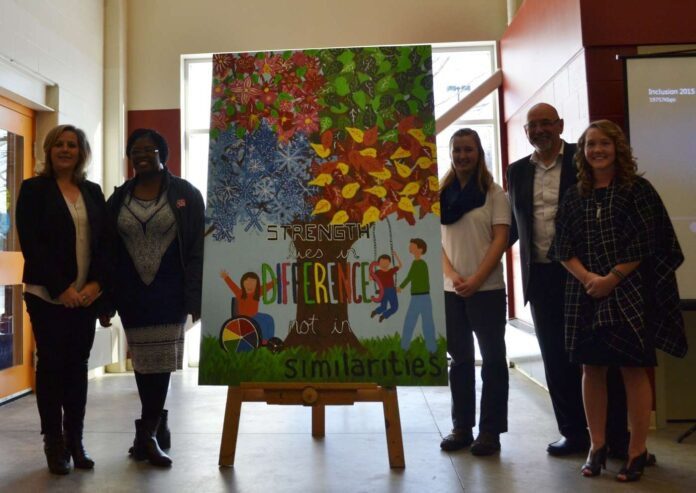 Melissa created the mural as part of the Re:Action 4 Inclusion initiative spearheaded by Community Living Ontario. “Re:Action 4 Inclusion is a social justice movement that supports young people and empowers them to take a look at their schools and communities, start asking who’s missing, and what they can do to get involved to change this,” says Latoya Jackson of Community Living Ontario.

Melissa was chosen to put together one of four projects by students throughout Ontario to promote inclusion in their schools and communities. After working at Community Living North Grenville as a student last summer, she was identified as hard working, passionate and a leader in her community.  “Sincere thanks goes to her for her commitment, her enthusiasm, and hard work to see this project through,” says Sandra McNamara, the Executive Director of Community Living North Grenville.

As part of the project, Melissa also held a contest in which students at Saint Mike’s submitted art pieces, poems and videos exploring the concept of inclusion in the community. Finally, she has organized motivational speaker Blake Fly, who she saw at the Re:Action 4 Inclusion conference last year in Orillia, to come speak at her school in April.

It was clear at the unveiling that Melissa is very passionate about what she does. “This mural is more than something on a wall that should be passed by without looking. It has been made so that we can know that we are able to create a world where everyone feels like they belong, everyone is accepted and everyone contributes in a meaningful way,” she said, teary eyed. After high school Melissa would love to study to become an occupational therapist, someone who helps people who have trouble performing the tasks of daily living (brushing teeth, doing laundry, etc.).

The colourful mural, which features the words “strength lies in our differences, not in our similarities”, will hang in the Municipal Centre as a reminder to everyone who walks through its doors how important it is to make everyone feel included, wanted and valued in our community. 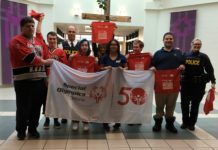