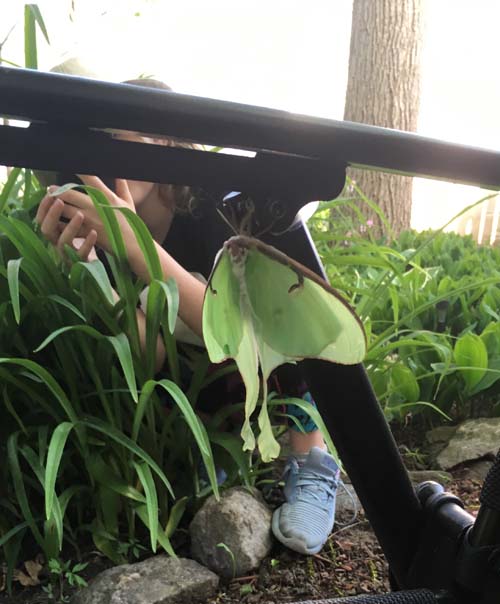 Tracy Reilly, a resident of Prescott Street in Kemptville, discovered something rather unusual in her garden last week. As you can see from the photograph, it was a very large green butterfly-like creature, much bigger than anything Tracy had seen before. It was a lovely shade of green and stayed around the garden, blending in with some of the greenery growing there. As we do with all such situations, we relied on Dr. Fred Schueler, the community’s resident expert on all things natural and environmental, and, naturally, Fred knew the answer:

He informed us that “ it’s a female Luna Moth, Actias luna. This large Saturniid moth is distinguished by its lime-green colour and the swallow-like tails on the hind wings. The green caterpillars feed on the leaves of several genera of trees, and development is relatively rapid, so that while in Canada there is one generation per year, in the States to the south there are two or even three generation.”

To underline how unusual it is to see this moth in North Grenville, much less in a Prescott Street back garden, Fred reported that: