The Kemptville Live crew are working early for next year’s festival, and they’ve started really well. Lined up to headline the Friday night show is the inimitable Steve Earle and The Dukes. Steve has been around for more than forty years and has delved into a wide range of musical styles. From his early material, like “Copperhead Road”, all the way through to his collaboration with Irish musician Sharon Shannon on “Galway Girl”, a huge hit with Celtic music lovers a few years ago.

The range of musicians who have played and worked with Steve Earle is equally broad, from The Indigo Girls to the Pogues, and his songs have been covered by the greats, Johnny Cash, Emmylou Harris, Joan Baez, and the man who inspired his latest album, Waylon Jennings.

In his eclectic career, Steve Earle has won three Grammys, and was nominated for a total of 11, so far. He has acted in movies and on stage, written plays, songs and short stories, and joined the ranks of radio hosts.

His new album, So You Wannabe an Outlaw, released on Warner Bros., returns to early country roots and has Willie Nelson dueting with him on the album’s title track. For his current tour, and his appearance at Kemptville Live, he is backed up by The Dukes, veterans of Steve Earle tours. The band consists of guitarist Chris Masterson, fiddle player Eleanor Whitmore, bassist Kelly Looney, and new members drummer Brad Pemberton and pedal steel player Ricky Ray Jackson. 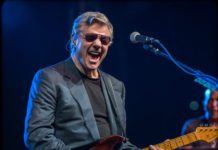