Allowing TVOntario to pull the plug on rural viewers proves once again the Wynne government has tuned out Ontarians who live outside the GTA, said Steve Clark, Ontario PC Deputy Leader and MPP for Leeds-Grenville.
Steve called on Minister of Education Mitzie Hunter to act in her capacity as the minister responsible for TVO and overturn the provincial broadcaster’s plans to decommission eight over-the-air transmitters. TVO will stop transmitting from towers in Belleville, Chatham, Cloyne, Kitchener, London, Ottawa, Thunder Bay and Windsor on July 31, 2017.
The announcement will also see seven maintenance technicians put out of work.
“Every provincial taxpayer contributes to the $40 million TVO receives from the government annually. Being able to watch TVO’s programming shouldn’t depend on having the right postal code,” said Steve.
In a letter to the Minister, he noted TVO’s executives are downplaying the impact of the decision by suggesting it will affect just one per cent of households.
“The number is far higher because they’re ignoring the fact many Ontarians in rural areas don’t have high-speed Internet to watch TVO programming online – even if they wanted to,” he stressed.
He added the decision will also affect many other families for whom Internet and cable TV are luxuries they must do without in an Ontario that’s become unaffordable under the Wynne government.
“TVOntario is our educational and public broadcaster and has a mandate to serve everyone in the province. “I’m calling on the minister to tell TVO executives to put their own budgets on the chopping block instead of important programming valued by Ontarians.” 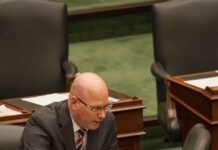