In late June that year, word got round that there was a young foreign family newly-arrived in town. They were staying in a hotel while they looked for an apartment, and were finding things very confusing indeed. There were three young children involved, one only a few weeks old, and being confined to a hotel room in a strange town was difficult. Someone in the office decided to invite them to a Canada Day BBQ as a way of introducing them to some new Canadian friends, and a car was dispatched to pick them up on the day.

What a new experience it was for them! To start with, the very idea of a bbq was new: imagine cooking outside in your garden. Hot dogs were something the children had never eaten, and the burgers were like nothing any of them had tasted before. These Canadians were so determined that the newcomers would feel welcome and included, although the constant comments: “You must be so glad to get away from the bombs and violence”, were hard to answer.

Then, with food and beer, sunshine and smiles, the gathering broke into “O Canada”, and the newcomers were deeply moved by it all. At home, there was a lot of politics involved in the national anthem: here it seemed joyful. The words struck home forcefully: this was an anthem you could sing proudly. There was no triumphalism, no arrogance or threats. Going home from the celebration, a foreign family felt they had come to a better place than they had imagined.

That may all seem too sentimental, too much nostalgic memories through rose-coloured glasses. But that was my first experience of Canada Day, and the effects have never really left me. It was years before I could become a citizen, but from that day, because of those people welcoming me and my family into their national birthday party, I felt this was a country I could become part of.

The words stayed with me too. “O Canada, we stand on guard for thee”. I have never felt that this was a militaristic statement, a call to arms. It has always seemed to me to be a promise, a commitment to protect and preserve what it is that makes Canada the country it is. And that is tied up, for me anyway, with the welcoming friendliness I experienced that day in Thunder Bay back in 1982. It is a promise to maintain the character of the country that invented peace-keeping for the United Nations. It tells “foreigners” that they can make a home here, not forsaking their ethnic and cultural roots, but adding them to the mix.

There are some, I know, who find that idea objectionable; who think that everyone should become “Canadian”. But what else is that? Canada has always been a country made up of immigrants, refugees, “foreigners”. The French arrived here, paid for by their Government, given land and supported by the merchants of France. The United Empire Loyalists were refugees, fleeing war and persecution, and dependant on government hand-outs of food, clothes and free land. That began a tradition, a pattern of immigration, from Europe and Asia and the United States, of people looking for something better, freedom and possibilities, a new chance for their children. There is no-one in Canada whose people did not come from somewhere else.

Maybe we sometimes fear that continuing that tradition of welcoming newcomers will somehow water down whatever Canada is, whatever Canadians are. But the fact is that “what Canada is” has been built on those traditions, on those foreigners who arrived here and had to fit into the climate, the harsh environment, the new way of doing things. Perhaps what native-born Canadians forget sometimes, is how grateful newcomers are to be here; how determined they can be to live up to the gift they have received by becoming part of this nation. They, we, after all, are the ones who chose this to be our new homeland.

It may be easy to dismiss all of this as a naive and simplistic view of Canada. Anyone who has lived anywhere else in the world, knows that it is not so. Canada is not perfect; it has faults, it has systemic racism, it has poverty, and it has political corruption. All of this is true. But immigrants and exiles are not looking for perfection: they are looking for better; and, in Canada, they find that better place, that place of possibilities and potential.

Somewhere across the land, a newly-arrived foreign family will be invited to join their new neighbours at a picnic, or party, or bbq, and will be introduced to something quite extraordinary and wonderful. If we can keep our focus on that, we can afford to welcome many newcomers, invite them to add their contribution to our communities, and put down roots for themselves and their children, then we can really sing out: “O Canada, we stand on guard for thee!”. 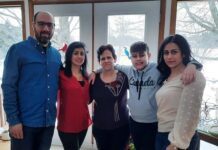 Reunited after more than four years