The Kemptville Squirt 1 girls softball team has followed up a great regular season with a championship in the A division playoff tournament in Williamsburg. The girls played ten regular season games and posted a perfect 10-0 record, landing them in first place heading into the tournament. The weekend consisted of three round robin games versus the 2nd, 3rd, and 4th seeded teams, followed by a final championship game.

A solid win in game 1 versus Gloucester got things rolling for the girls early Saturday morning. Game number 2 was against the number 2 seed, Winchester #2, a formidable opponent who provided good competition in the regular season match-up. In a back and forth affair, Winchester held the lead going into the last inning. Kemptville scored 2 runs to tie things up in the top half, and played great defence in the bottom, to finish the game in a tie. Game 3 of the round robin was against Winchester #1. Kemptville’s offense proved too much for the young Winchester team, and the Wildcats cruised to a victory to secure a place in the championship game Sunday morning.

The girls would again face the Winchester #2 team in the final, and the game was another close affair. Winchester came ready to play and jumped to an early lead, as Kemptville struggled to put up much offence against solid pitching from Winchester. The Wildcats steadied the ship with solid defence in the middle innings and picked away at the lead, going into the bottom of the fifth inning down by 3. The Kemptville kids came alive and put up 4 runs to take a 1 run lead into the sixth and final inning. Winchester would not go quietly, and, with the heart of their order coming up, they scored a single run to tie the game. In the bottom half, Wildcat Naomi Jones got on base with a single, and quickly made her way to 3rd with a couple of stolen bases. With two outs, Madison Richens came to the plate and delivered with a single down the first base line to drive in the winning run. A hard-earned victory for the girls capped off a great season, with a final record of 13 wins and 1 tie. 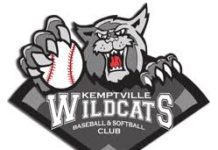