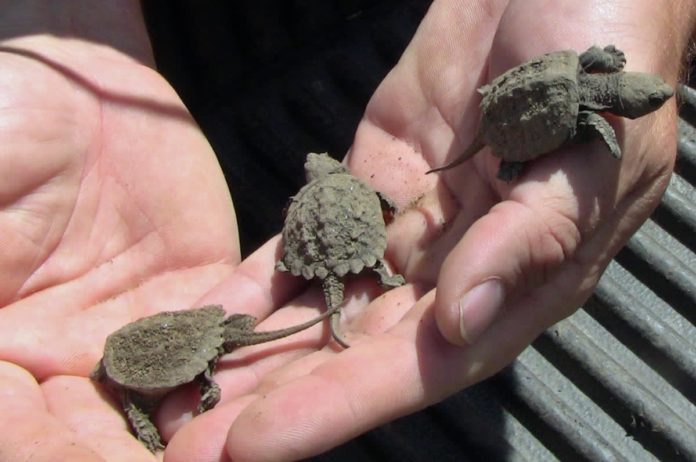 In May of this year, David Seburn, Freshwater Turtle Specialist with the Canadian Wildlife Federation, was told that roadwork on culverts in North Grenville might be endangering the nests of snapping turtles. With the active, and fascinated, help of the municipality’s road crew, David was able to save 238 eggs, all of which would have been destroyed otherwise. David was very appreciative of the workers’ attitude: “The construction company had no idea what to do with turtle eggs, but were happy to shut down their work while we excavated the eggs. They could have ignored the eggs and carried on with their work, but they took the effort to do the right thing when calling turtle egg rescuers was easy. The workers were genuinely interested in the turtle eggs.”

This evening I was back to the site from which David Seburn described rescuing the Snapping Turtle eggs, and I found that Snappers had been digging test holes on the gravel road shoulder, and in a gravel ramp to a field about 30 m from the culvert, but had not dug in the slopes of the new embankment, which had a sparse stand of Wheat and scruffy-looking sod which had not done well over the winter.

I’ve noted nesting Snappers at this site for many years, but have not seen a roadkill, so I hope the changed arrangement and character of the substrate don’t lead some females to get out into the path of traffic.

Maybe the next step in Turtle conservation, after fencing & generous culverts, and rescuing eggs when roadwork is done, will be to ensure that rebuilt slopes of nesting bridges have a good substrate for nesting in future years.

At another traditional nesting site, which had had no disturbance the day before yesterday (9 June), the entire slope was tracked and dug up by Snappers (evidenced by the size of the holes and the tail-drags), and there were a number of test holes under the guardrails on the road shoulder.

I didn’t see any Turtles at either site, which suggests that with today’s relatively cool temperature, they may have been doing the nesting activity during the afternoon rather than the evening.