We tend not to think about slavery in Canada, but the cruel institution has a 200-year history.

Author and historian Jennifer DeBruin makes a presentation on slavery in Upper Canada, Sunday, August 5, at 2 pm in the Royal Canadian Legion in Merrickville. Her focus will be on the St. Lawrence River settlements.

Some Loyalist brought their slaves to Canada after the American Revolution; about 3,000 in all were taken to Nova Scotia, Lower Canada and Upper Canada. The diary of Reverend John Stuart of Kingston, the first Church of England minister in Upper Canada, records he brought Black slaves from the Mohawk Valley. Matthew Elliot worked 60 slaves on his 4,000 acres near Amherstburg on the Detroit River.

As many as 700 men, women and children were enslaved in Upper Canada.

Fifteen summer events have been organized by the Merrickville and District Historical Society to commemorate the 255th anniversary of the arrival of the Merrick family at the Great Falls of the Rideau River in 1793. Merrickville-Wolford Threads of Life 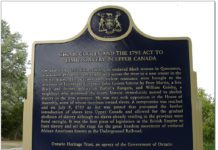 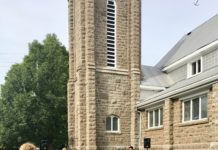