From 2013 to 2014, I had the privilege of working with Terry Butler as the Program Coordinator for the Old Town Kemptville Business Improvement Area. Terry was who I reported to on a daily basis, so, as a result, I spent a lot of time in his Victorian Pantry – so much so that I believe I was adopted as a junior member of his “cabinet” – a backbencher, if you will.

I’ll always remember Terry for his absolute selfless commitment to encouraging business growth in Old Town Kemptville; his major role in revitalizing and beautifying the area, but also his passion about building community downtown.

Terry understood small business; the importance of providing excellent service and building customer loyalty. It really didn’t matter to Terry who you were when you walked through his front door. Whether you came into the Pantry asking for directions, or were there to complain about a pothole, you were met with a cheery greeting by Terry. He was there to help you – and Terry helped many, many people, often quietly and without seeking credit for doing so.

Usually, if you came in the back door, you already knew Terry and Josie, you got your own coffee and sat quietly until he was finished attending his paying customers. The pantry was where he “held court”; it was the most accessible constituency office any Councillor ever had. Terry always made time to discuss issues or concerns with citizens and was my mentor in dealing with downtown issues amongst other things.

Terry sat on the Board of Management of the BIA as our Council Representative while he was on Council, and was instrumental in transforming the look and feel of Old Town ten years ago. He always referred to this improvement of the streetscape as Phase One. To him, it was just setting the stage for future renewal and the revitalization of Old Town. When I saw Terry two weeks ago, I made sure he heard about the progress on the last of the Kemptville Sesquicentennial legacy projects he was responsible for – the Waterfront Trail connecting Anniversary Park in Ferguson Forest to Riverside Park. I was very happy to tell him that tenders were out and that they’d soon be dumping gravel for the first section of his trail. Terry took ownership of every project he was involved in.

In planning events downtown, it was obvious Terry had a soft spot for children; but it wasn’t just him being sentimental. Terry always took the long view about building business downtown. It was important to him that kids always had a great experience in Old Town; that when they left Kemptville for education or work in their twenties, they left with a storehouse of precious memories and would want to return when it was time to settle down and start a family. Terry knew that building community was an essential part of building economic growth.

Often, after a particularly stressful conflict-ridden meeting at the Pantry about one thing or the other, as I was leaving, Terry would quietly sing “We are Family”, the 1979 hit by Sister Sledge. It was a joke we shared, but that was Terry – he had a great sense of humour, he wanted people to work together for the greater good, and he was interested in building community. Downtown Kemptville could not have had a better friend. He was our champion. Rest in peace, Terry Butler, the Mayor of Old Town. 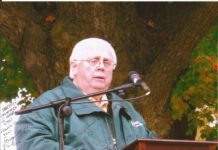