The challenges posed to North Grenville residents by high hydro prices over the last decade have caused hardship and hard choices to be made: heat or food, in some cases. Following the Throne Speech last week, the new Ontario Government of Doug Ford has begun to shake-up the Hydro One Board as a preliminary to shaking up the entire corporation. The government promises that this will soon lead to significant drops in the cost of hydro for the average user.

First to go under the new regime was Hydro One’s Chief Executive Officer, Mayo Schmidt, who retired with immediate effect from his $6.2-million job. On his departure, CEO Schmidt is to receive his base salary, and a bonus for 2018 prorated to the day of his resignation. In addition, he will also get a one-time lump sum cash payment of $400,000, “in lieu of all post-retirement benefits and allowances as provided in his contract or otherwise.”

The rest of the Hydro One Board of Directors will also leave their positions between now and August 15, and a new Board will be appointed by a nominating committee made up of representatives of the major shareholding partners. The agreement between the Province and the corporation states that the committee will be made up of “one representative of each of the five largest beneficial owners of Voting Securities of Hydro One, excluding the Province”, which still owns around 47% of Hydro One. The new Board will choose a new CEO, who will be the eleventh member of the Board. The province will be consulted on Hydro One’s future pay of the new Board.

In a press conference called to announce the changes, Premier Ford seemed very satisfied with the rearrangement: “I said over and over and over again on the campaign trail the CEO of Hydro One and the board will be gone. I’m happy to say today the CEO and the board of Hydro One, they’re gone. They’re done. They’re done. We’re going to turn a new corner.”

Although unable, or unwilling to explain how it would be accomplished, the Premier promised that the new system would result in a drop in hydro rates of 12%. The Minister of Energy, Northern Development and Mines, Greg Rickford, issued a statement in which he said that the government would “ensure the stability of the system is preserved and consumers are protected…After years of rising electricity bills, this is a step towards our main goal—bringing down electricity rates for all Ontarians. Help is here.”

Holiday heat from Hydro One 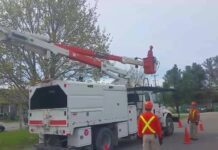