Coming to the Urbandale Arts Centre in Kemptville from March 30 to April 14 is Kemptville Youth Musical Theatre’s 25th production – “Newsies The Musical”- the Tony Award-winning Broadway phenomenon. The show is based on the historical newsboy strike of 1899 that shook the ivory towers of William Randolph Hearst and Joseph Pulitzer. It leaps onto the stage with soul stirring music, amazing heart, and exhilarating dancing. This electrifying David-and-Goliath story is of a ragged band of New York street urchins who took on the two publishing titans and their whole corporate establishment to fight for what is right. The poor and orphaned teenagers, selling newspapers for a penny a paper, are pushed to the limit when the newspaper moguls try to take away more of their meager profits. Jack Kelly (played by Nathanael Flinn in photo), becomes the leader who rallies the newsies from across the city to take a stand and strike against the most powerful publishers in the country. Their cause becomes even bigger than any of the newsies imagined when they realize they’re fighting for all the children working in unfair and unsafe conditions across the nation. KYMTC’s “Newsies” is directed by Barb Lacelle and assistant director Kevin Colwell, with choreography by Laura Anderson. Music Director is Phillip Konopka, Producer is Marilyn Conroy, Set Designer is Bonnie Selleck, Master Builder is Neil Conroy, Costume Designer is Carolyn Bruce, Lighting Designer is Kevin Colwell, Sound Designer is Peter Miller and Stage Managers are Catherine Robbens and Cait Lewis. The cast of KYMTC is amazing as always! Tickets are on sale now! Go to Scotiabank or buy online. Go to www.kymtc.org for more information 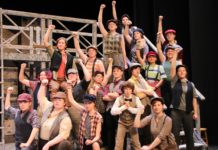