This time of year in North Grenville, everyone’s attention seems drawn to the Kemptville Live Music Festival. It’s easy to understand why. The festival draws thousands of music fans here over the weekend and could mean as much as a million dollars in economic activity for the area. There are music legends eating in local restaurants, and an intense feeling of community pride as we welcome these visitors to ‘Paradise’ (in the words of our Mayor).

However, there’s another very special event that happened the week before Kemptville Live this year. It had its own headliners (though no one knew about them until the day of the event), it raised $115,000 for the Kemptville District Hospital, a local resident won a brand new red Dodge truck, some participants left with prizes worth thousands of dollars, and over 150 people (including friends, family and complete strangers) got together to remember a local resident whose family helped bring a hospital to Kemptville.

If you haven’t guessed already, the event that I’m referring to is the Bob Perry Memorial Golf Tournament, which was hosted this year at the eQuinelle Golf Club. It was a memorable day of golf, fellowship, NHL hockey legends, and the opportunity to raise as much money as possible to support KDH. During the dinner, KDH Foundation Chair, Rob Noseworthy, told the assembled group that a new Chronic Obstructive Pulmonary Disease (COPD) clinic at KDH had been fully funded on behalf of the Perry family. COPD is a disease characterized by long-term poor airflow in the lungs. The disease has symptoms of shortness of breath and coughing, and worsens over time. The late Bob Perry suffered from COPD.

The previously mentioned surprise headliners were four members of the multiple Stanley Cup-winning Montreal Canadiens of the 1970’s and 80’s. The four headliners were Murray Wilson, Doug Jarvis, Bob Gainey, and Larry Robinson, who won at least four Stanley Cups together with Montreal. Each player brought one of their Montreal jerseys with them and signed it for the big auction sale after dinner. These jerseys alone raised $6,700, with an extra $1,600 raised for a signed Jean Beliveau jersey that they brought with them. There were lots of happy hockey fans when they figured out that these four were at the tournament, including North Grenville CAO Brian Carré, who is a lifelong fan of the team.

Despite a late start to the golf portion of the day due to a big rainstorm, the skies let up just enough to allow the golfers to enjoy their round on the 18-hole course, which was in tip-top shape. As the golfers slowly finished their rounds, and started arriving back at the clubhouse, a delicious buffet chicken dinner by Catered Affairs was next on the agenda. After everyone had been well fed, the live auction started, with the previously mentioned jerseys, a bike, a kayak, Senators game tickets, Grey Cup tickets, a stainless steel BBQ, and many other impressive items to be bid on, including a ‘country dinner’ hosted by the Perry family themselves. The big draw for the brand new red Dodge truck was won by eQuinelle resident Randy Hughes, who sat for a moment at his table in disbelief, before raising his arms in victory.

An event of this magnitude can’t happen without countless hours of volunteer work, which was spearheaded by the Kemptville District Hospital Foundation, the Perry family, and other friends of the hospital. The planning and organizing for this event unfolds over months, and then quickly comes together over the last couple of weeks, which can make for stressful days. There were many very generous donations made by countless individuals and companies from across the region, with some stepping up at the last minute to help the tournament reach certain goals. To put the success of the event into perspective, this event apparently raised the largest amount of money for a charity golf tournament in Eastern Ontario, an astonishing $115,000.

Rob Noseworthy thanked all those involved in making this such a success: “Thank you to our valued sponsors whose donations covered the cost of purchasing the Truck ensuring that 100 percent of all tickets sales will be used to build the COPD clinic in Memory of Bob Perry. Thanks also to the Perry Family and the many businesses, individuals and golfers who helped make the sold out tournament a truly memorable day. The success of this tournament is a testament to the importance of this Hospital in our Community.”

Some organizers and volunteers were feeling inspired by the success of this year’s event, and sounded determined to raise even more money next year, with some new features and surprises for the 2018 edition. You don’t have to be a fan of hockey or golf to be able to get excited about how much this event means to, not only the participants, but to anyone who’s experienced the exceptional care at KDH. This is the type of community effort that will help keep our hospital open and thriving well into the future. 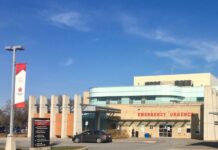