In exciting local baseball news, the Seaway Surge Baseball Club will be hosting the 2020 and 2021 Ontario Provincial baseball Bantam AA championships. Both tournaments will be played over Labour Day weekend, with games taking place at South Gower Park and Morrisburg Water Front Park. This is great news for the Seaway Surge, but, more importantly, it is exciting for baseball in our communities, as some of the best 15-year-old baseball players in the province will be here competing at a very high level.

The Seaway Surge executive first applied for the right to host the tournaments back in the Fall and, in the end, it came down to a choice between the Clarington Orioles and Seaway Surge organizations.

“We were thrilled to find out that we had won the application,” said Tim Hamilton of the Surge, who spearheaded the application. “This is the first time ever that an Ontario Baseball Association provincial championship is played in the National Capital Region. This is another strong signal from the OBA of their commitment to growth and support for baseball in our region”.

The Surge are well poised to host the tournament, as the association has been hosting the largest amateur baseball tournament in Canada for a number of years now. In 2019 the Surge welcomed 88 teams over three weekends in July, hosting the Seaway Surge Shootout.

“This year we are aiming for 100 teams for the Shootout. Between the Shootout and the Provincial tournament, we will be having over 1,300 families coming through our communities this summer”.

The Surge are hoping to attract media attention and will be approaching local TV and Radio outlets to help host the event, and this will also be a great opportunity for local companies to sponsor their organizations through outfield fence signage and other areas.

“Over the next few weeks, a tournament committee will be organized, as there’s a lot of work that goes into hosting an event of this size. But we are thrilled and looking forward to putting on a great show while welcoming people from all over the province to our region”. 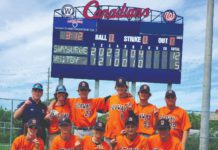