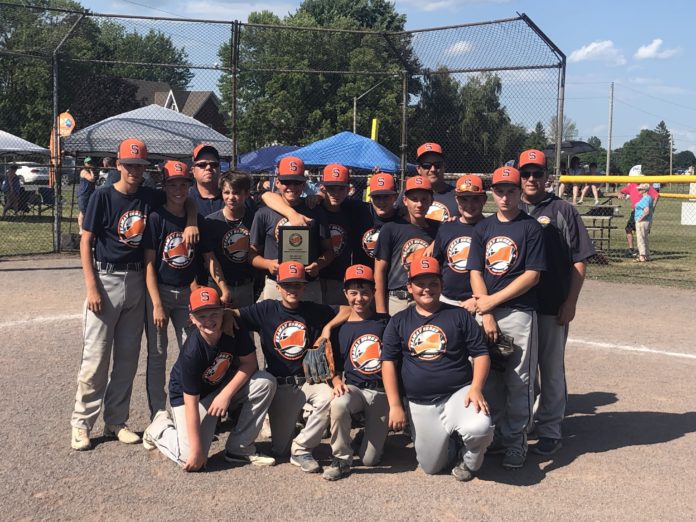 The Seaway Surge Baseball Club concluded their 4th annual Shootout Tournament over the first three weekends in July. The tournament this year attracted 83 teams and over 1,200 players and coaches from Ontario and Quebec, making it the largest baseball tournament in Eastern Ontario. This year’s tournament was held in five towns, including Kemptville, Merrickville, Chesterville, Morrisburg and Winchester, and used a total of 11 diamonds in these municipalities, with 149 games played. The tournament employed over 35 umpires, and Seaway would like to thank the many volunteers that spent their weekend at the diamonds playing music, introducing players, scorekeeping, maintaining the grounds and many other duties. Plans are already underway for the 5th annual Shootout Tournament next season, to be held again on the first three weekends in July.

The Seaway Peewee team was a perfect 5-0, going undefeated in the round robin with victories over Oakville A’s 14-2, Kitchener Panthers 21-1 and Richmond Hill Phoenix 16-15. In the semi-final, Surge defeated Kanata Cubs 15-5 and, in the final, won 15-4 over Aurora King Jays.

This year, the Seaway Peewee team is playing in local National Capital Ontario Baseball Association (NCOBA) league and sits in first place, with a record of 17-2-1, and has an overall season record of 29-6-1.

Other tournaments attended include Kanata 2-1 record, and 3-1 at Backyard Classic in Cooperstown, NY, where they defeated teams from Erie, PA and Albany, NY before losing in semi-finals. The squad is preparing for playoffs in the next couple of weeks, and then off to the Ontario Baseball Association “AA” Peewee Championships in Chatham to represent NCOBA over the September long weekend.