If you were anywhere near the Prescott Street bridge in Kemptville on Saturday, August 25, during the mid-afternoon, you may have seen a number of youth paddling rafts along the South Branch.

The North Grenville Scouts spent the morning at the Curry Park boat-launch, building rafts from re-used materials such as wooden pallets and IKEA bed supports, and figuring out how to secure coffee tins and various plastic bottles for flotation. In the afternoon, the youth paddled their rafts along the South Branch toward the bridge on Prescott Street, concluding with a dramatic swamping of one of the main rafts. There was not one dry Scout in the group!

The Scouts saw a number of basking painted turtles, checked out the murals on the south side of the creek, and collected garbage as they paddled back to Curry Park.

Over the course of the 2017-2018 year, the Scouts have learned a variety of practical and team-building skills through their experiences of different types of camping, multi-distance hikes, STEM type activities and canoeing. For the most part, their excursions are locally based; the Scouts take advantage of the diverse habitats and terrain in this area. Raft day was developed as part of a water-craft focus. In the winter, Scouts first linked with Cubs to make small canoes using recycled materials, and in early spring, the Scouts constructed mini-rafts. They were encouraged to try to float their rafts on their own, for fun, and with the idea that there would be a larger summer expedition down the Kemptville Creek using large-scale recycled materials. Some Scouts worked on their large raft at home between spring and summer, and brought it to the event for final touches and to paddle it.

It was a great event and completed a summer full of canoeing sessions and some camps. The 2018-2019 Scouting year season started up again on the 29 of August, and will run until end of May. 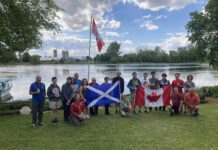