The gym at École Sainte-Marguerite-Bourgeoys was full of excited students and community members on Wednesday at what they hope will be the first of many science fairs. Principal, Lisa Samrai, says that, while the school has had science fairs in the past, it hasn’t been a tradition for many years. It was Grade 1 teacher, Hannah Wiles, who first proposed the idea to her students. After receiving a positive response from her class, she asked the other teachers in the school if their classes would be interested in participating. The answer was a resounding “yes”.

Every student in the school was somehow involved in the science fair. The Kindergarten class did a project together about the lifecycle of butterflies, and all the Grade 1 students did their projects about bridges. The older students chose their own projects and worked either individually or in teams of two. Projects covered all areas of science, including chemistry, biology, engineering, space and technology. “The kids all came up with their ideas,” Lisa says. “The students were very involved with their projects, because it was something they were really interested in.”

Local dignitaries and members of the community were invited to be the judges for the science fair. Mayor Doug Struthers, Deputy Fire Chief Brad Cole, and Jane Campbell of Mrs. McGarrigle’s, just to name a few. “We really tried to involve the community,” Lisa says.
Prizes were given out for First, Second and Third place in each age category, as well as a special prize for best group project, that went to the Kindergarten class. It was a fun afternoon for everyone involved, and Lisa says they hope to make it a yearly event. “All the grades were really engaged,” Lisa says. “Parents said it’s all they could talk about.” 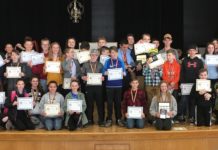