On January 5, 39 members of the Rural FASD Support Network attended the Ottawa Senators – Minnesota Wild game as special guests of the Ottawa Senators. These children, most of whom were attending their first hockey game, were located in the double suite on the 400 level, which was key to their attendance. The children were able to move around throughout the game, immediately go to the hallway to escape loud noises, had catered food, and access to a private elevator. The suite provided a muffled environment and restricted access from the crowds. The Senators had a member of their Accessibility Department check in throughout the game, gave a tour of the TV studio, brought greetings on the Jumbotron at the first intermission, and enrolled the kids in #SensArmy. The feedback from the kids and parents was totally positive in all aspects and they would love the opportunity to do it again. The Rural FASD Support Network would like to thank the Senators for creating such a wonderful experience for these children and their families. 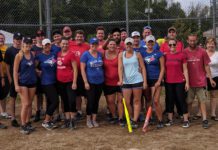