Throwing rocks is normally an activity that’s quite frowned upon by adults. Interestingly, this past weekend, every adult in attendance at the North Grenville Curling Club seemed to be more than delighted to watch women from around the world throw them with incredible power and accuracy at their ‘houses’.

Though another year of the Royal Lepage Women’s Fall Classic has come and gone, the fond memories created by one of the premier annual sporting events hosted in the area will linger for participants, volunteers, sponsors and curling fans.

As some of you may already know, the field of twenty-four teams for this event is always a diverse one with teams participating from across the globe. This year’s field was no different as there were two teams from Sweden and one from Russia. Canada is always well represented with teams from Manitoba, Quebec, Nova Scotia, Prince Edward Island, Newfoundland and across Ontario in this year’s field. For the first time in the history of the Classic, there was a team participating from west of Manitoba. Delta, British Columbia fielded a team this year making it a true coast-to-coast event.

Sunday was an intense day of curling for the final eight teams with some remarkable shot-making and teamwork on display for those lucky enough to be watching. One of the early favourites, Team Moiseeva from Russia lost in the quarterfinal to Team MacDiarmid from Dartmouth, Nova Scotia who also beat the impressive junior team Team Daniels from Delta, BC to advance to the final. Team Wrana from Sweden advanced to the final with a morning victory over a weary Team Curtis and then earned a long, closely fought win over (former Classic winners from 2014) Team Auld from Listowel, Ontario.

The final was an international affair as Canada in the form of Team MacDiarmid from Dartmouth, faced off with Sweden whose flag was carried by Team Wrana from Sundbyberg just north of the capital of Stockholm.

Co-chairs for the event Doreen O’Sullivan and Jim Dolan were thrilled with all aspects of this year’s event and wanted to make a point of thanking all volunteers, sponsors, fans and the teams for their part in making the event so successful. 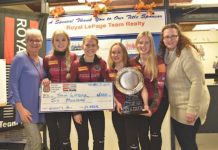 Putting the class in classic