This winter has been one of snow, freezing rain, melting, re-freezing, and yet more snow – lots and lots of snow. But, in the face of this winter challenge, the road crews of North Grenville’s Public Works Department have been keeping the streets as clear and as safe as possible. This is what we may have come to expect from this dedicated crew, but when you venture outside the municipal boundaries into the City of Ottawa, you can really appreciate the job they do here at home. Even in the last week, side streets in Ottawa had not been ploughed and cars were having a difficult time just getting through them. In North Grenville, although side streets in the urban areas, or some rural roads, may not get cleared as quickly as residents might like, the work does get done and there is a well-thought out schedule which is used to direct the road crews.

Karen Dunlop, Director Public Works, and Doug Scott, Roads Superintendent, have developed a system for ploughing, sanding and grading the municipal roads in an efficient and highly effective manner. There are more than 300 kms of roads in North Grenville that have to be taken care of by the Public Works road and maintenance crews twelve months of the year, but the winter months are especially demanding. Half of the roads are paved, the other half gravel, and it takes about six hours to plough the paved surfaces and possibly twice that for the gravel roads, so, in the event of a snowfall, the drivers are kept busy.

The crews work in a single shift that runs from 4 am to 8 pm, although drivers must have a clear eight hours rest between shifts, which can last for up to thirteen hours in really bad weather conditions. The regulations are laid down by the Province of Ontario, who describe Minimum Standards for road clearance and maintenance. It is the policy and practice of Doug and his team to exceed those standards, and residents of North Grenville can be confident that they do. There is a priority list of roads to be cleared, depending on the speed limit and traffic volumes usual on that road, so they are cleared in the most convenient way for commuters in the mornings.

GPS units in the cabs of the vehicles let Doug know where each one is at any time, and also records the depth of snow being ploughed and where the ploughs have been at a given time. So anyone calling to ask where the ploughs are, can be told exactly when they were last at that address. They also record the speed the ploughs travel at throughout their shift. These people take a lot of the danger and inconvenience out of travelling in winter for the people of North Grenville. They deserve respect and deep gratitude for the long hours and expertise that goes into their work.

Considering a Museum for North Grenville 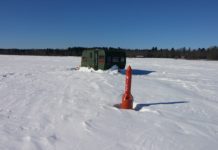