There are certain rights and freedoms we value in Canada, perhaps especially in North Grenville. After all, we have had experience in the past of those rights being flouted by those in high places. You may have got the impression from reading elsewhere that our right of free speech has been in grave danger in the Council chamber recently; that members of Council were in danger of being silenced in their attempts to address the public. This, however, has been a proverbial storm in a teacup, and those involved agree that there has been some over-reaction to suggestions made regarding procedure at Council meetings.

The idea was raised that Councillors could submit written reports on their activities, to be included in the briefing package available to the public each Friday before Council, rather than have them recite a monotonous and often repetitive list of events attended (“I was at the BBQ put on by the Goodfellows, and then I went to an event run by the Tigers, followed by a concert put on by the Chamber of Horrors, etc. etc. To which the next Councillor need only add: “Me too.”). Councillor Jim Bertram feared that the written report was a way to stop Councillors making a verbal report at each meeting, and he resisted that idea strenuously. Once he accepted that there was no intention of stopping verbal reports, the temperature dropped and the suggestion was considered in a more reasonable tone.

I, for one, am happier to see the Councillor’s over-reaction, if we can call it that, than to have had no reaction at all in the face of what was, at first, perceived as a threat to free communication with the electorate. In the past, Councils have seemed to value secrecy and behind-the-scenes decision making above any attempt at consultation and communication with the public. If you have to err, better it be on the side of openness and respect for freedoms.

Ironically, at the last Council meeting, when a member of the public asked each Councillor why they voted on a certain matter, she was dismissed by Councillor Tobin, who told them to go and check the recording of the meeting to get her answers. Free speech can be such a relative thing when you’re in political office, can’t it? It must be remembered, however, that the Councillor had as a mentor the previous Mayor, who was not one for patience in the face of public questioning. He preferred not to listen to questions, or comments, even from Council members. Councilor Tobin grew up, as it were, under that system, and seems to have been moulded by it.

Irony upon irony: this same Council has been constantly prevented from speaking publicly about issues, most especially over the past few months. They are not allowed to speak to us about Kemptville College, the potential lawsuit over Kemptville Meadows, the source of information about Energy East that was provided to Mayor Gordon, or the recent departure of Director of Planning, Forbes Symon. This is not to say that they don’t necessarily want to speak about these issues. They are legally prevented from doing so.

So, Freedom of Information is now the problem. Forbes Symon was the most powerful individual in the Municipality when it came to planning issues, building permits, zoning amendments, etc. He was seconded to negotiate the future of Kemptville College, keeping his salary of more than $100,000 per annum (taxpayers’ dollars, of course). Suddenly, we heard that he was on paid leave, and now “he is no longer with the Municipality”, which is all the Municipality is allowed to say. This legal restriction is not the fault of Council or staff, remember, there would be serious legal consequences were they to say anything. The official comment is: “We wish him well”, but you get the impression they don’t really mean it. It makes you wonder, doesn’t it? Why is there a need for such a restriction, a confidentiality agreement governing Forbes Symon’s departure? What is it we are not allowed to know about why he has left?

Rights, or privileges? Do we have a right to know, as citizens and taxpayers, the circumstances surrounding such a high-profile departure from the Municipality? Sadly, the answer is that we do not. Members of this Council, and senior staff, have been taking steps to be more transparent in their activities, and that is a welcome step forward over other Councils in the past. It is a cautious process, trying to strike a balance between the taxpayers’ right to know what their representatives are doing in their name, and the need to maintain the proper level of confidentiality and discretion necessary in the running of any business or organisation.

Many in the community feel that the process is too slow and that there is not yet sufficient openness. Those of us who remember the Dark Ages of the previous administration B.G. (Before Gordon) will keep a patient and careful watch that our freedoms are not treated simply as privileges that can be granted or withheld as our “betters” decide. 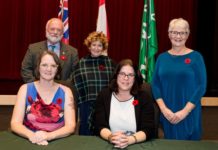