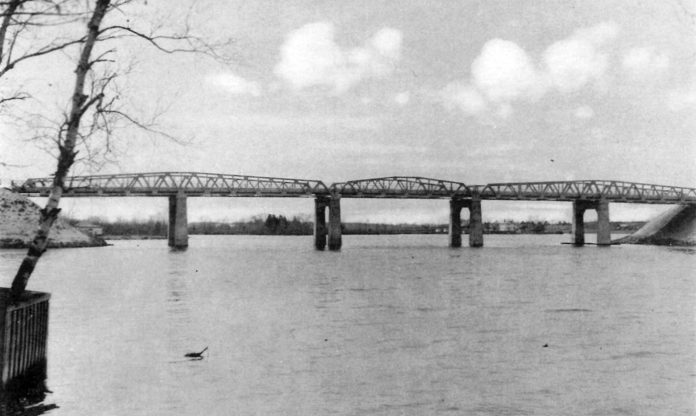 In the late 1930’s, the road from Kemptville to the Rideau River followed a different route and ended at the swing bridge at Beckett’s Landing. Since 1918, that road had been a Provincial Highway, the main route between Ottawa and Prescott. In 1925, it was officially designated Highway 16. But, in that decade, a major survey was conducted into the size and weight of vehicles using the bridge crossing the Rideau River at Beckett’s Landing. The results were surprising, the old swing bridge was no longer capable of safely taking the weight and volume of vehicles using it, and the bridge was closed to vehicles over five tons in weight.

The old Beckett’s Bridge was removed, and plans were in place to replace it with a newer, fixed bridge. During the winter of 1935‑36, cars passed through gaps cut in the snow along the banks of the Rideau, and crossed over on the ice. Vehicles that were too heavy for the ice were directed to Burritt’s Rapids where they used the bridges there to cross the Rideau. Before a new bridge could be built at Beckett’s however, surveyors were sent in to consider a new location further to the east. The line of road from Kemptville to Beckett’s and then joining the highway on the far side, contained a number of sharp curves and there had been many serious accidents as a result of vehicles failing to make the corners. It was decided to change the road layout and allow the highway to run in a straight line across the Rideau beside the golf course instead.

A new bridge across the Rideau was built in 1937. The bridge in the photograph is the one built in 1927, crossing the Rideau by piggy‑backing on a number of small islands which had been used as cottage resorts up until then. The new bridge stood until 1991, when the current bridge was officially opened. The 1937 bridge remained in use while the new one was being built just a few metres to the east. Today, you can still see the old line of the road which crossed that bridge just to one side of the highway. People use it for parking. The older road, however, leading to Beckett’s Landing, is still there too. If you turn down River Road opposite Rideau Glen Golf Course and stop at the corner of Beckett’s Landing Road, look around and imagine the line of the original road coming from Kemptville, still following the ancient Indian trail from the St. Lawrence from before written records until within living memory.