Heritage mapmaker and trail promoter Doug Bond is this year’s recipient of the Bill Thake Memorial Economic Development Leadership Award. Mr. Bond, a retired teacher and long-time resident of the Township of Rideau Lakes, has spent decades bringing travellers to the region by promoting natural trails, creating driving and boating tours and, more recently, cycling and paddling adventures available as apps for cell phones. He is a driving force behind the township’s famous Heritage Map. As chair of the Municipal Heritage Advisory Committee, Mr. Bond and his team have produced walking tours in five Rideau Lakes communities and three driving tours covering the township’s historical sites.

Warden Robin Jones announced the award winner at the 10th anniversary of the United Counties of Leeds and Grenville Economic Development Summit event in Kemptville. The event was a sell-out with 236 attendees, the largest crowd in the history of the event. Bill Thake’s widow, Marlene, and inaugural award recipient Glenn Allen helped present the award.

Honoured with a nomination was Geraldine Taylor, of North Grenville. Ms. Taylor is a trailblazer in the art and business worlds. She is renowned for infusing energy back into the local art scene, heralding the community’s culture and heritage, and for the Highway 416 Art Cruze, a tour drawing people to communities along the major thoroughfare. Ms. Taylor has also played a key role in the rejuvenation of Kemptville’s downtown.

“These community leaders are so important to the vitality of Leeds and Grenville,” said Warden Jones. “We are proud to honour both nominees for the major contributions they have made in their communities and to United Counties overall,” she said.

Over the past eight years, 32 deserving women and men have been nominated and 11 individuals have received the award. Past recipients from North Grenville include Jean Jacques Rousseau, Don Munz, Robert Noseworthy, and Gerald Tallman. 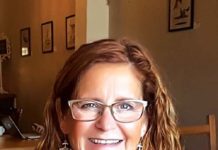