As the War of 1812 was coming to an end in late-1814, the British authorities began to turn their minds to potential future conflicts and to learn what lessons they could from the events of the previous two years. The vulnerability of the St. Lawrence corridor to enemy attack had been recognised, and the Government realised how easily the United States could have isolated and conquered Upper Canada simply by blockading the river. The solution arrived at was that an alternate supply route between Lower Canada and Lake Ontario had to be found. This, it was hoped, would be far enough away from the frontier to be safe from American raids, or even another full-scale invasion. The next step in the plan was to ensure the safety of the new route. To guarantee this, the Government decided to offer free land along the route of the proposed defensive line to discharged soldiers who had served in Canada during the war. Later, the plan was extended to include Canadian Militia who had served in various capacities during the hostilities.

The third point of the Government’s plan was one which recognised the fact that, while discharged soldiers would be good defenders of the new supply route in time of conflict, there was also an urgent need for civilian settlers to fill in the empty land of Upper Canada. These would not only add to the social and economic life of the province, but would also provide experienced farmers and tradespeople, something discharged soldiers could not. However, the large American-born population of 1812 was not something that the Government wished to maintain, so the new settlers would be found in Britain and Ireland. The balance between Americans and British would be adjusted in favour of those deemed more loyal and less “democratically tainted” than Americans.

To get the plan started, the British Government decreed that Americans would be banned from immigrating into the British territory. This was to be accomplished by making all new settlers take an oath of loyalty to the Crown. In case any American was prepared to take the oath, Canadian officials were given authority to deny individuals the opportunity, forcing some to leave the province and return to the United States. This initiative did not survive for long, and American settlers continued to arrive, but never in great numbers compared to the influx that was expected from Britain and Ireland.

On December 6, 1814, a General Order was issued proclaiming the Crown’s intention of settling discharged soldiers on lands in Upper Canada. The difficulty was knowing where these soldiers could be placed. On February 9, 1815 Surveyor General Thomas Ridout was informed of the proposed scheme and ordered to launch an investigation to identify possible locations for  settlements. The original idea was to find a location where the soldiers could be settled in close proximity to each other. A Military Depot would be established at a central site, from which provisions, tools, and other necessities could be issued to the settlers for the first year of the project.

Ridout’s report was not very welcome to the Government. Their intention was to locate the soldiers close to the new route, which they had already tentatively sited along the Rideau and down to Gananoque. Ridout had been instructed to look at the eastern end of the province, but by 1814, the lands bordering either side of the Rideau had been surveyed into townships and lands granted there to Loyalists after 1802. Not all of this land had been settled, but it was taken and patented, leaving only the Crown and Clergy Reserves vacant in many townships. These were lots, amounting to two-sevenths of all the lots in a township, which had been set aside for the benefit of the Crown and the Anglican Church. They were almost all still vacant by the end of the War, owing to the plentiful free or cheap land remaining elsewhere in the province.

But the Upper Canadian authorities, dominated by Loyalists, did not accept that the Crown Reserves should be used for discharged soldiers, or poor immigrants, as long as many Loyalists had still not been granted their full allowance of free land. This led to serious complications in the allocation of lands to the soldiers and arriving immigrants.

The problem in the interior townships was access: until the Rideau Canal was finished, access to the interior townships depended on the very few roads that existed, and whatever navigable waters went through the townships. And these same factors were to have an enormous impact on the future direction of settlement after the end of the War of 1812.

The Settlement that passed us by 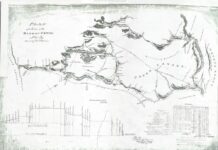