A Merrickville resident has made it her mission to look into changing the way people see and treat Fetal Alcohol Spectrum Disorder [FASD]. Katie MacLaurin is a mother of five who is going into her second year of the Master of Social Work program at Carleton University. Her job with vulnerable children in the Department of Foreign Affairs pushed her to go for the degree; however, her decision to research FASD is more personal. “Our family has some experience with the disorder,” she says.

According to the Fetal Alcohol Spectrum Disorder Ontario Network of Expertise, FASD is an umbrella term describing the range of effects that can occur in an individual whose mother drank alcohol during pregnancy. These effects may include physical, mental health, behavioural and learning disabilities, with lifelong implications. Health Canada estimates that there are at least 300,000 people living with FASD in the country, although researchers say this estimate is conservative.

As someone who has experience with the disorder, Katie has found that it is very poorly understood and heavily stigmatized. Because of this it is often misdiagnosed, causing the child to be improperly treated. “If the numbers are so low that a jurisdiction doesn’t feel like there is a need for services, those services aren’t made available,” Katie says. “To be on the spectrum right now is not a super place to be in Ontario.”

Katie’s research will be focused on looking at what other provinces, specifically British Columbia and Alberta, are doing for treating FASD. “These jurisdictions are 15-20 years ahead in the treatment of FASD,” she says.

There is also the barrier of the stigma that is attached to the disorder, which Katie would like to see banished, once and for all. There are many things that may cause a woman to drink while she is pregnant. Sometimes, a woman may not find out she is pregnant until it is too late, and some doctors still tell women that it is ok to have a glass of wine, even though the World Health Organization has stated that there is no safe amount of alcohol to drink during pregnancy. The stigma, according to Katie, also does nothing to address the socio-economic injustices that contribute to poverty and addiction. “I believe strongly that no one intends to do anything during their pregnancy that may have implications for the baby,” she says. “There is not room in the discussion for blaming.”

Katie is hoping that her findings will allow her to make some recommendations specific to Ontario for a province-wide strategy for FASD. This comes at an appropriate time, as the province recently announced funding for a strategy to combat FASD. Katie expects that this is part of the reason she received the Hilary M. Weston Scholarship from the provincial government, which grants money to two Master of Social Work students each year doing research in the field of mental health. “My hope is that we get to the point that Autism did ten years ago. Let’s just accept it for what it is, end the stigma, and put supports in place, so that young people with this disorder can reach their maximum potential.” 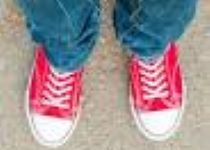 Lighting it up RED