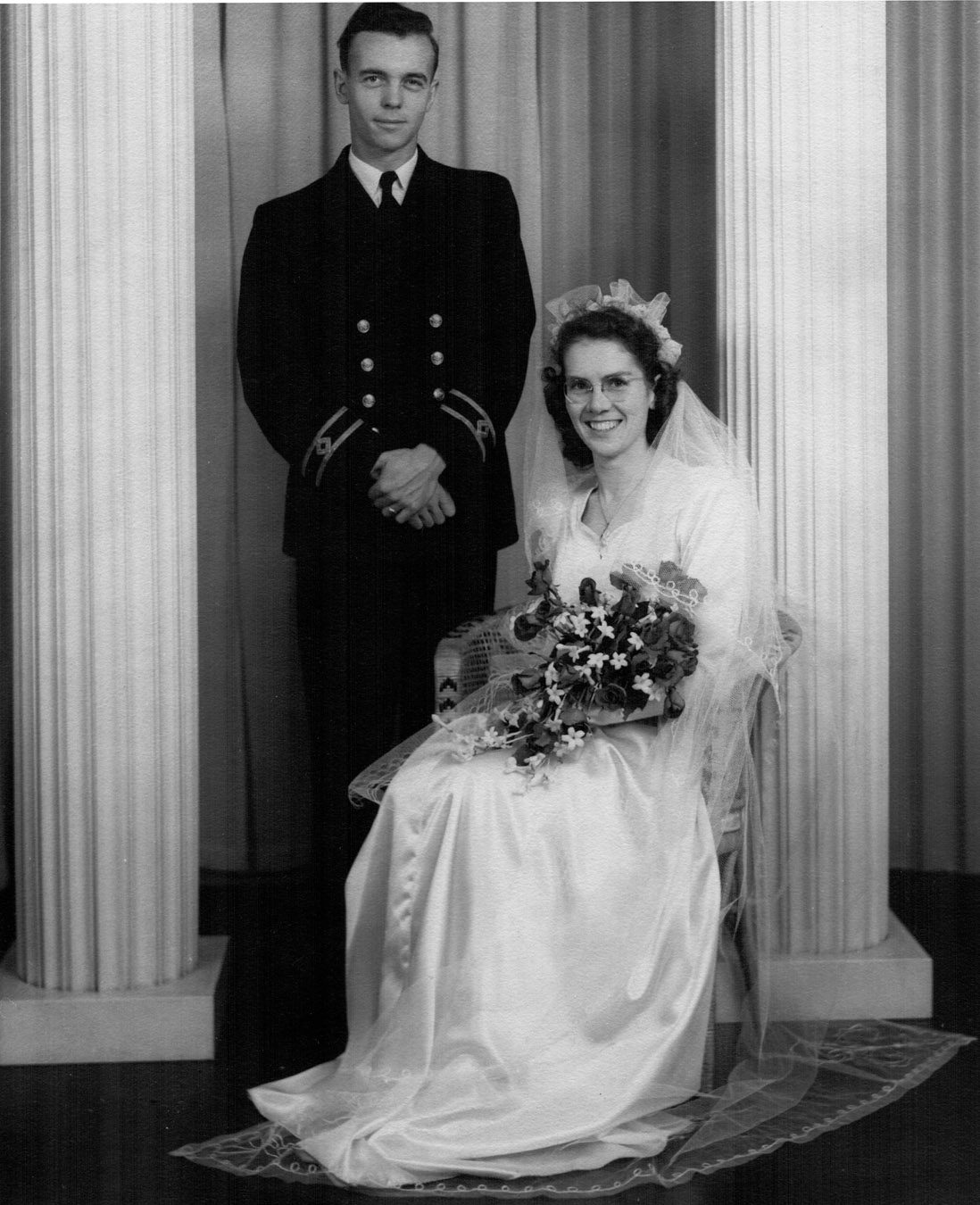 My father, Keith Cole Angus, a resident of Kemptville for 60 years, died on November 28. Dad was born in Regina in 1921, the son of Warwick and Margaret Angus, immigrants from England and Scotland. He lived most of his youth in Winnipeg, where his father founded and ran the Angus School of Commerce, a school that taught typing, shorthand, bookkeeping, and other office skills.

So far as I can tell, Dad lived an ordinary and comfortable childhood, but in about 1935, he took an unexpected turn. This 14-year-old boy, who had lived his entire life on the Prairies, who had never seen the ocean and never learned to swim, declared that above all else he wanted to be a sailor, to go to sea.

Keith was so insistent that his parents sent him to England to attend HMS Conway, a school for future ship officers. I think they hoped that a year of homesickness, at a school with semi-military discipline, would cure him of that foolishness. It didn’t work. He started at the Conway at 15, and at 17 he was travelling around the world as an Apprentice on the merchant ship Silver Yew.

That was not a safe time to go to sea. War broke out in 1939, and in 1940, the Silver Yew was torpedoed and sank in the Atlantic Ocean, about 350 miles west of Africa. Keith and some other survivors then rowed a lifeboat for 14 hours before reaching the island of St. Vincent in Cape Verde. After 6 weeks they were picked up by the British navy and taken back to North America.

Dad continued in the merchant marine on various ships through the war, including taking part in the Murmansk run, the very dangerous convoys that carried supplies from Scotland north over Norway, to the main Russian port on the Arctic Ocean. He worked his way up from apprentice to midshipman to second mate to first mate, and finally won his captain’s papers.

In 1942, on a break between voyages, he visited his parents in Winnipeg, and went to a dentist. If there was one thing Dad hated and feared for his entire life, it was dentists. He was so nervous that while the dentist pulled his wisdom teeth, the young woman who ran the office held his hand. As she often told us later, she never let go. Before Dad went back to sea, he and Margaret Thomas were engaged. They were married in Vancouver in 1944. By coincidence, before she met Dad, Margaret had been a student at and graduated from the Angus School of Commerce.

In 1947 Dad left the sea. He spent a year writing fiction for children, but, as he said later, the payments were too small and infrequent to support a family, so he worked as a laborer in the CPR shops until he was hired in 1949 by the federal Ministry of Transport as a ship safety inspector. He spent the rest of his working life with the government, first in Vancouver, and then in Ottawa from 1958 on.

In 1959 Mom and Dad bought a century old farmhouse just outside of Kemptville. It had no heat or running water, just an outdoor toilet and minimal electricity, but they and their four children moved there full time in 1960. They renovated the house and named it Allfast, which is a term sailors use when a ship is safely in harbor, with everything tied down and secure.

They lived there together until Mom died in 1987, and Dad stayed on until he died two weeks ago.

As I said, Dad worked for the government, but he was never happy in the bureaucracy. So when his children were grown, he took early retirement at 55. He then spent 43 years in retirement — more time than he had spent working! He worked in his large garden, listened to operas, did the New York Times and Globe crossword puzzles every day, and read very widely. He was particularly interested in and knowledgeable about British and military history.

One result of that interest was his membership in the Richard the Third society, an international organization dedicated to proving that King Richard, who was killed in 1485, was innocent of the many crimes he supposedly committed. You may have seen the TV documentary about Richard III’s remains being found under a parking lot — Dad was proud to have supported the project that made that discovery.

But I think the activity that Dad enjoyed most was the Challenge, a column of humor and wordplay that appeared weekly in the Globe & Mail from 1991 to 2006. His submissions appeared in the newspaper so often that his family compiled them in two hardcover books, which we presented to him on his 80th and 85th birthdays.

Once, the Challenge editor asked for puns based on some literary work. And when asked for a limerick that ended with the name of a famous person, Dad wrote:

George W. Bush, with a scowl,
Called Saddam Hussein something foul.
When told to go easy
He said, “You’re too queasy.
You should hear what I’ve been Colin Powell.”

The Globe published hundreds more of his jokes, stories and limericks over 15 years. The Challenge appealed to Dad’s love of writing, his knowledge of literature, politics, and history — and above to all his addiction to puns. Everyone who spent time with Keith would eventually hear some awful and hilarious play on words, and he was thrilled that so many of them were selected to appear in a national newspaper.

Dad lived for 98 years and five months — just 19 months short of a full century. If he had lived a few more weeks, this would have been his 60th consecutive Christmas in Allfast, but that was not to be. Still, we’re glad that his passing was quick and peaceful, and that he was himself, with all faculties intact, until the day he died. The care he received from Doctor Abdel Malek and from the staff at the Kemptville Hospital was excellent. As he wished, his body has been donated for research and training at the Queens University medical school.

Keith Angus is survived by four children, five grandchildren, and five great grandchildren. We miss him a lot, but we prize our memories of a generous, thoughtful and witty man who made our lives brighter for so many years.