When people start showing up to register for an event an hour before the registration opens in the morning, usually things go one of two ways from there: sky high, or nuclear meltdown. In this case, the former won the day. Having already exceeded their online registration target, the forty walk-ups who wanted to register in person that morning, just further multiplied the positive energy that had been building for the North Grenville Rural Summit.

It was hard to wipe the smiles off the faces of the organizing committee as the people kept filing in, grabbing a coffee and networking over every square inch of the Summit space. Over 160 paid registrants wandered throughout Parish Hall on the campus of the former Kemptville College. Add to that approximately 50 volunteers, partners, sponsors, presenters, media, support staff and invitees, and the space was the perfect size for the event.

The event officially kicked off in the main auditorium with a welcome greeting from MPP Steve Clark, and a heartfelt greeting from Erika Cuccaro who was representing her father, North Grenville Councillor, Jim Bertram. Jim was the Chair of the Summit Organizing Committee until a cancer diagnosis forced him to begin undergoing treatment that wouldn’t allow him to attend the Summit. Next up was North Grenville Councillor, Donovan Arnaud (an organizing committee member), who brought greetings from the Municipality of North Grenville and also spoke of his friend Jim Bertram.

Master of Ceremonies, Deron Johnston (another organizing committee member), kept things humming along, and introduced keynote speaker, Moe Garahan, Executive Director of Just Food in Ottawa. Drawing on a lifetime of personal and professional experience in agriculture, Moe delivered an impassioned and insightful presentation on “the elements needed to build a strong local food system”. The impact of her presentation was immediate, as government employees, politicians, and industry professionals were feverishly writing notes as she spoke. This further resulted in a number of animated conversations out in the hallways afterwards. It was also a very timely discussion, as it touched on several points that appeared to align with the Municipality of North Grenville’s future plans for the former Kemptville College campus, which they officially acquired a mere ten days ago from the provincial government.

Two full rounds of smaller workshops followed the keynote, allowing attendees to wander in and out of smaller lecture hall-type rooms. Some of the more well-attended topics of the morning were: “How Agri-tourism can add revenue to an agricultural business”, “Raising local food awareness through farmers’ markets”, “The new drone economy” (a discussion on drone technology) and “The importance of online connectivity on the farm”.

After an unforgettable roast beef/chicken buffet meal (with all ingredients sourced within 100km of Kemptville) in the campus cafeteria, and prepared by Catered Affairs, everyone headed back to Parish Hall for another two rounds of learning. There were some very tough choices for people to make throughout the day, as they often wanted to see multiple workshops that were going on at the same time. “Bee-keeping for small batch honey”, “B&H 55 years in grocery retail”, “Growing indoors” and “Changes in municipal land use planning” appeared to draw the attention of the majority of people in the afternoon sessions.

To close out the day, Kemptville resident, Katie Nolan, from the Ontario Ministry of Agriculture, Food and Rural Affairs (OMAFRA) led a panel discussion on “Creating opportunities in agriculture as a community”. Panelists were Pat Remillard (new project manager for the Kemptville Campus project) and Jim Beveridge (owner of B&H and organizing committee member). After the discussion, there were a number of questions asked, and it was obvious that people wanted to know more about the future plans for the Kemptville Campus.

As Deron said in his closing remarks, the committee wanted to thank everyone for making the summit such a success, including the partners, sponsors, presenters, volunteers, trade show participants, guests, media contributors, and support staff. He also personally thanked Julia, Angie and Isabelle of “In The Moment Events” who were able to take the vision of the organizing committee, come up with a plan for the event, and make it happen. As Deron noted, had Jim Bertram been there, he knew that Jim would have been very proud to see his vision fully realized. 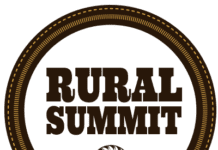 An Exciting Weekend in Store for Kemptville