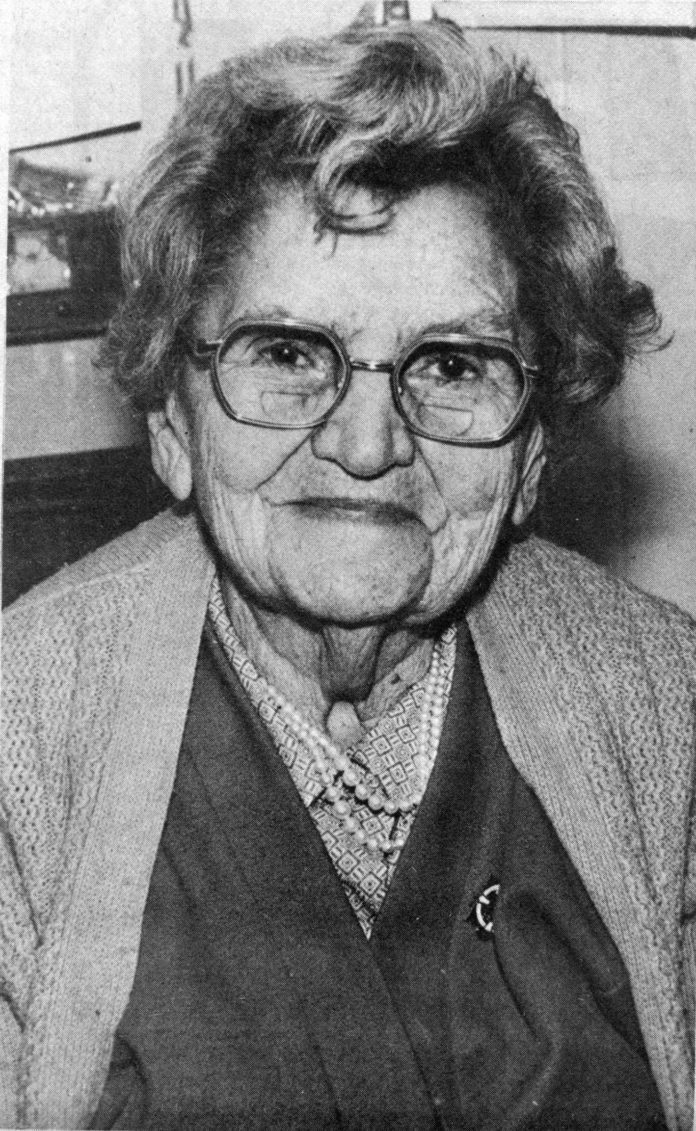 When Rachel Swedlove arrived in Kemptville in 1929, she had already lived more than many people manage in a lifetime. Born Rachel Achber, in Salat, Lithuania, in 1891, she had come to Canada and married Zelig Sverdlov from Byelorussia in Toronto in 1913. Zelig anglicised his name to Swedlove, and he and Ruth settled in Stouffville, where they opened the “Swedlove Wicker Factory”. Zelig’s trade was in making wicker baskets and products, and all their goods were hand woven. But his traditional approach to his craft could not compete with machines, and so they closed the factory and moved to New Liskeard, where they started a ladies’ and men’s wear store.

By then, they had three children. Kusiel, called Casey, was born in 1914; Freda was added in 1918, and the youngest, Harold, was born in 1927, just before they arrived in New Liskeard. It seemed that the young immigrant family has settled happily into their new Canadian home.

Tragedy struck the family in 1929, when the store caught fire. Rachel and her three children were helped to safety by Zelig, but he was killed when the floor he was standing on collapsed under him. Ruth broke both her legs in the catastrophe, and, when she recovered, she brought her children to Kemptville, where Zelig’s brother, Sam, ran a general store at 29 Clothier Street East, in the old United Farmers building. In 1933, when Sam moved to Ottawa, Rachel bought him out and ran the business herself. This was the third business in the third town in twenty years.

The store sold everything, from groceries, dry goods, and furniture, to shoes, paint and paper, clothing, and stoves. Rachel was a hard worker, and a good employer. By the time she expanded the business into the building next door in 1969, her staff had grown from six in 1956, to 38, and she had a fleet of ten trucks to serve her customers in Kemptville and throughout the district. Rachel changed the face of her part of Clothier Street when she added the new building to the old. It had been a hotel for almost a century, and Rachel had it physically moved to join the United Farmers building, broke through the connecting wall with a door, and made it into a single store. That section later become the Canadian Tire Store, and is now the Kemptville Fabric Shoppe and Bensons Auto Parts.

Rachel added to her property by buying the building on the west side of her store, now O’Heaphy’s Pub, and extended the original store to the rear to provide even more space. She introduced a credit department to serve her customers, and accepted eggs and butter as barter for goods from the store, as the people of Kemptville struggled through the Hungry Thirties and beyond.

Her son, Harold, eventually took over the store, becoming a Charter Member of the Kemptville Lions Club. Sadly, he died in 1969, aged just 42. Casey moved away and purchased movie theatres in Prescott and Cardinal, as well as building the Linden Theatre in Ottawa. Freda, became a nurse and enlisted in the Canadian Army in 1944 as a Nursing Sister.

Rachel held firmly to her Jewish traditions and culture, but that only encouraged her in her activities in the community. She was respected and loved for her generosity and the care with which she kept in touch with the needs of her customers. Well-known Kemptville resident, Pat Malony was Sales Manager at Swedloves and used to drive Rachel around town at Christmas time, when she would deliver parcels with food, dresses and shoes to those families she knew were in need. Pat remembers that “She wanted to make sure poor families would have a good Christmas”. She also had Christmas parties where everyone was welcome, but it was mostly the families she helped who came and enjoyed a good meal and a great time. Nurses would sometimes drop by the store and mention that a family was struggling. This was enough for Mrs Swedlove to pay them a visit.

“Mrs Swedlove respected all the Jewish traditions and holidays and visited her synagogue but she also supported the local churches whenever she could”, recalls Pat. When the war ended, Mrs Swedlove held a huge party for the soldiers. She rented the Odd Fellows Hall and hired an orchestra. There was plenty of food for everyone.”

This was a woman who knew what it was to be alone with a young family. She never forgot who she was, and where she came from. She became an important member of this community, serving it in so many ways. Swedloves Store closed in 1979, and Rachel moved to Ottawa to be near family. She died there in 1989. It was a long road from Salat, Lithuania to Kemptville, with much loss and hardship on the way. But Rachel Swedlove survived and prospered, giving back in every way she could to her adopted home. Her influence was widespread and lasting.