The recent sale of two of the most historic buildings in North Grenville has raised fears over their future. The Oddfellows Hall on Clothier Street East, and the Ferguson House at the corner of Clothier West and Rideau Streets, leave these two iconic buildings in an uncertain position. Rumours went around the community that one or both would be demolished to make room for condos, a prospect that is simply unacceptable in a municipality where so many such heritage assets have been lost over decades.

The Oddfellows Hall has been part of the Kemptville scene since it was first built in 1859 by Joseph Bower, a leading merchant in the community in the latter half of the century; it was run by Bowers and his sons as a general store until 1870. It also housed a tailor shop, with the tailoring done upstairs. 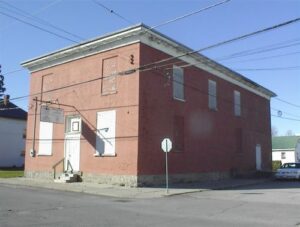 In 1888, an Agricultural Fair was being held here, and it became the first building in Kemptville to be lit by electric lights, as lines were run especially for the occasion from George Keating’s mill above the bridge at Prescott Street. It was bought by the Independent Order of Odd Fellows in 1892, two years after they had arrived in Kemptville. The store was remodeled with lodge rooms on the second floor, and an Opera House on the ground floor. It had a stage for concerts, plays or dance bands. For a few years in the 1940’s, Mr. Vincent Kelly showed movies there every Saturday night. The Fireman’s Ball was held there on March 17 every year. There was a full course meal followed by a dance. This hall has been used by the community ever since for public and private events and regular dances, plays and concerts.

Although the exterior of the building is far from attractive, the boarded up windows can be reopened and a completely new look can be given to the old Opera House. According to the Municipality’s Director of Planning, Amy Martin, “We have not received an application to change the zoning on the property. We have had inquiries on the potential redevelopment of the site, but nothing has formally come forward.”

The house at the corner of Clothier and Rideau has a long and distinguished history. The present house was built some time after 1840 and, according to gossip, was paid for from funds of a republican group, the local Hunters Lodge, dispersed after the Battle of the Windmill in 1838. Nathaniel Fenton bought the property in 1843 and operated a hotel in the house until his death in 1849, and his wife and her new husband used it as a store and a lady’s finishing school for many years after that. One of the students, Elizabeth Bell, later married Dr. C. F. Ferguson and moved into the house in 1897. It remained in the Ferguson family until 1953. Dr. Ferguson served as Member of Parliament from 1874 until 1896. 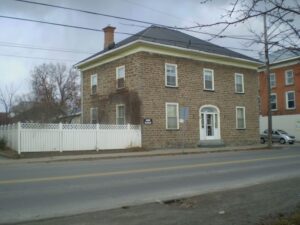 Dr. Ferguson’s son was Ontario Premier, G. Howard Ferguson, who grew up there. Over time, parts of the property were sold off for homes and the Salvation Army Hall. The house itself was later transformed into the Stonehaven Rest Home.

When asked by the Times about the status of the building since its sale, Ms. Martin noted that, “we have had a preliminary conversation regarding the property and its redevelopment. The discussions have primarily revolved around the renovation of the structure to create apartment units. There has not been mention to us of demolishing the site for new development. Until we have a formal development application, I can only provide what has been discussed anecdotally with the property owners/potential developers.”

Both of these buildings need protecting from loss or serious alterations, whatever the final use by the new owners. Private ownership is not necessarily a bad thing, and some heritage structures around the Municipality have benefitted from the care and investment of their owners. These would include the Anglican and Presbyterian churches in Oxford Mills, for example. The home of G. Howard Ferguson on Prescott at Vanburen is being carefully restored and preserved by its owner. No one can expect the Municipality to take over these buildings, as the cost might be objected to by taxpayers, and the buildings already owned by the Municipality require a great deal of investment as it is.

But the list of historic buildings that have been lost to demolition, fire, or decay is long, and it must be emphasized that any hope of developing a tourism plan based on heritage and history would be a real asset to the community’s economy, so some investment is definitely warranted. The Planning Department also oversees the work of the Heritage Advisory Committee, and it would be worthwhile for that body to keep an eye on the future plans for these and other heritage buildings in North Grenville. There is a limit to the powers of the Municipality over privately-owned structures, but, at the very least, can they ensure that these two assets cannot be simply demolished?